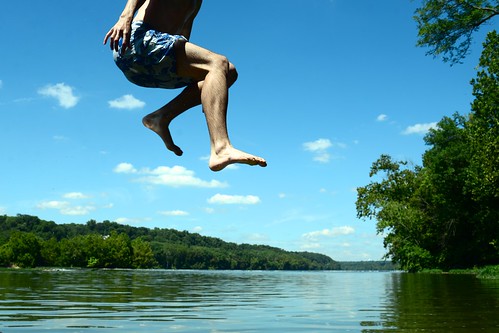 Water, water everywhere, and not a place to take a dip? That’s the attitude most people have taken to the idea of swimming in the Potomac river by Georgetown. But if an ambitious effort is successful, Georgetown will be ground zero for river swimming in DC.

WAMU wrote this week on steps the city and others are taking to make the Potomac and the Anacostia rivers swimmable. Specifically:

In 1971, the head of the Environmental Protection Agency pressured city lawmakers to ban swimming. They passed a law making swimming or wading in the Potomac, Anacostia or Rock Creek punishable by a $300 fine or 10 days in jail.

Fast forward almost 50 years: Billions of dollars have been spent cleaning up the rivers, and some environmentalists and swimmers say it’s time to get back into the water. City leaders are talking about relaxing — if not lifting entirely — the decades-old swim ban, and discussing where swim platforms or beaches could be located.

The article concludes optimistically that within five years it may be safe and legal to swim in one or both of the rivers. This would largely be due to massive projects of DC Water to stop raw sewage from being dumped into the river.

It seems crazy that even in this day and age such a thing could occur, but it does happen with just about every heavy rain fall. That’s because in DC’s older sewage pipes, stormwater drains (i.e. the drains on the street) run into the same tunnels that take away our sewage. When rains get so heavy that these pipes can’t handle it all at once, the overflow has to go somewhere. Rather than send it back up the storm drains (or our toilets) the overflows are dumped into the area’s waterways. These spots are called combined sewage overflows, or CSOs.

To prevent the pipes from overflowing, DC Water has been building a series of gigantic underground pipes that can act as temporary reservoirs of the water until the Blue Plains treatment facility can work through the backlog. By 2023, authorities hope to be able to divert 98% of sewage overflows from the Anacostia. Additional tunnels in Alexandria and DC will be open by 2025 and 2030, respectively, which will keep similar amounts out of the Potomac. So within 12 years or so, the rivers really ought to be about as pristine as they’re going to get.

But what about swimming now?

Technically it’s still illegal to swim in the Potomac from Georgetown. But on just about any summer weekend afternoon there are dozens of boats moored above the Key Bridge, many with people jumping in and out the water.

GM is a rower, but not a fantastic one, so he’s taken his fair share of unintentional swims. But he’s also taken plenty of voluntary dips. So long as it hasn’t rained too much immediately prior, he figures the risk is pretty low, so long as he doesn’t have any open cuts and he keeps his mouth closed. (A quick shower at the dock is also a regular feature.)

There are seven CSOs along the Georgetown waterfront (the blue dots):

So when they’re overflowing, it’s really a bad idea to get in the water. There’s a light Thompsons Boathouse that is supposed to light when the CSOs are overflowing. It’s red while it’s happening, and yellow for 24 hours after it’s stopped.

Here’s a photo of it from this morning. The light is red:

Pollution in the river is not confined to CSO overflows. Bacteria such as E coli can plume even without CSO events. Luckily there’s website that now tracks the water quality in DC area rivers and says whether the bacteria level is unsafe or not. Here’s the page for Thompson’s Boat House.

GM’s been taking dips in the Potomac for years, and he’s still got only two arms and ten fingers. But there surely are plenty of people who don’t want to risk it. That’s fair. Hopefully conditions will continue to improve and more and more people will feel comfortable. It’s a shame to live so close to a beautiful river and feel afraid to dive in. With time and effort, that will change.