What Would You Like to See at the Dean and Deluca?

The Dean and Deluca is now officially dead. The end of a 27 year era. But what would you like to see replace it?

As GM reported, there is a federal law mandating that the building be used as a market. But that could be lots of different concepts. Here are a couple possible models that could likely satisfy that mandate: 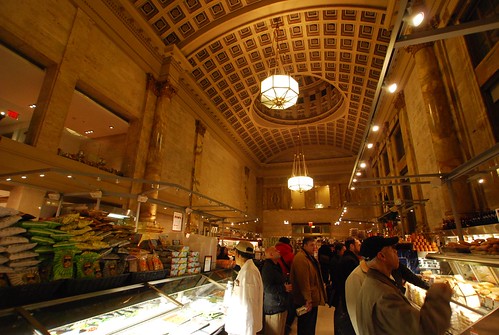 Photo of Balducci’s in NYC by Riccoboni6.

This would probably make a lot of people happy. There probably isn’t any grocer out there that replicates the high-boogie offerings of Dean and Deluca (or at least the Dean and Deluca of yesteryear). But there are a handful that would aim for the same experience within the same smaller footprint that the building offers (versus, for instance, a typical Whole Foods). Balducci’s and Wagshall’s are two regional grocers that could probably fit that bill. There are other grocers not based in DC that also deliver a market along these lines. Citerella in the New York area would be a great candidate, but there are many more just like it. 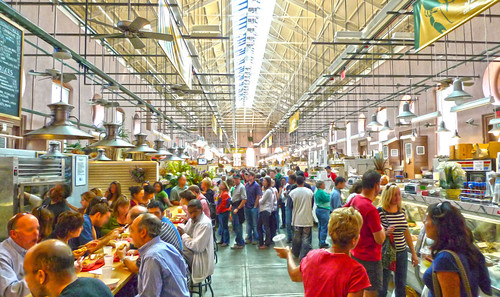 Rather than having a single grocer using the space, the building could return to its roots as one of the constellation of markets that once dotted DC, including the still operating Eastern Market. Under this model, the building space is chopped up into booths with a vendor taking each space.

This would be the most nostalgic use of the building. But it’s fair to point out that it has been a long time since it was used that way. Western Development ran it somewhat like that for a few years in the 1980s, but that ultimately failed. Before that it hosted an auto parts store for a long time (photo above from the 1960s). And it’s hard to recreate that special relationship Eastern Market has between its vendors and its customers. 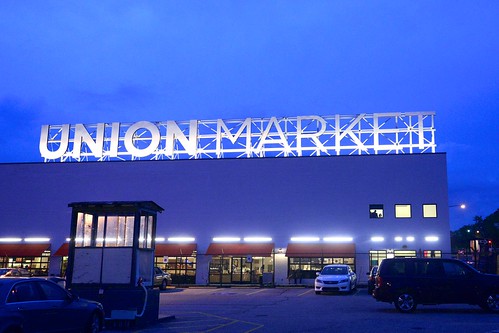 One of the hottest retail properties in the entire District is Union Market, in northeast near Gallaudet University. It occupies a former wholesale market building that was also used as a farmers market. It was bought and redeveloped by EDENS in 2012. At that time, it was presented as a newer and hipper market building, with butchers, cheese mongers and other vendors next to restaurants and high-end soda shops. While a few market vendors remain, the reality is that Union Market is just a large food hall at this point. While none of the other models discussed here would be places you’d get a week’s worth of groceries, Union Market would be the least useful for this purpose.

But it’s still insanely popular! Maybe a smaller version of that would work here?

A spin on the Union Market idea would be to open a food hall. The difference between this and a Union Market model would be to drop the pretense that it was a market at all. Ballston has a new food hall like this, and it’s basically just an old mall food court, but spruced up with fast casual restaurants to appeal to millennials. Of all the models, GM thinks this would be the worst, but also that it is the most likely.

What do you think? Any specific grocers you’d like to see? And specific models?

4 responses to “What Would You Like to See at the Dean and Deluca?”