Last week, the owners of the popular bagel shop, Call Your Mother, appeared before the Board of Zoning Adjustment to request a variance to operate their shop at 3428 O St. NW, on the corner of O St. and 35th. While the ANC voted to approve the variance, and the Office of Planning also supported it, a group of neighbors, living adjacent or nearby, as well as the ANC commissioner for the location objected to the variance. While the BZA deferred a final decision on the application to December, it’s worth taking a moment to consider how absolutely absurd it is that zoning makes such approval necessary in the first place.

Zoning regulates the size and use of properties. Each property is assigned a particular zone, which sets forth, among other things, how tall the building can be, how much of the property area it can cover, and (most important for this discussion) what you can do on the property. For most residential zones, the only thing you’re allowed to do “by right” (i.e. without having to seek additional approval) is to use it as a home. Commercially zoned properties, on the other hand, allow you to do just about any (legal) commercial enterprise on site.

Georgetown is a mix of residential and commercially zoned blocks:

Roughly speaking, the yellow areas are the residentially zoned blocks. For Georgetown that includes R-19 (for blocks with primarily detached homes) and R-20 (blocks primarily full of rowhouses). There are a few more varieties of commercially zones. MU-4 covers most of Wisconsin Ave. and M St. MU-12, 13, and 14 covers south of M St. (this area used to be zoned as “Waterfront”, but that name was changed with the zoning rewrite several years ago).

This map, of course, wasn’t around when Georgetown was being built into what it is today. The first significant zoning laws were adopted in DC in 1920. The laws were largely modeled after New York’s. From the beginning, though, they did pretty much the same thing the modern zoning laws do: regulate the size of buildings and how they can be used.

A map was drawn up in 1921 delineating for the first time what blocks would be commercial and what would be residential. Here is the Georgetown portion of the 1921 use map:

The black colored blocks are the commercial blocks, the light colored blocks the residential. As you can see, obviously M and Wisconsin were zoned for commercial from the start. But this map allowed for a substantial amount of commercial into the residential neighborhood. P St. west of Wisconsin was almost entirely zoned for commercial. 36th St. was as well. And a portion of P St. in east Georgetown (the heart of the historic black Herring Hill neighborhood) was also zoned commercial.

This acknowledgment carried forward to the first major refinement of the maps in 1936: 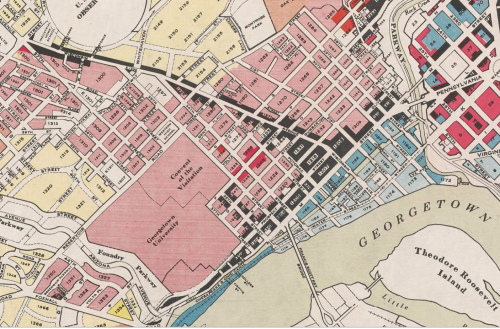 In this map, the black still represents commercial. As you can see, several blocks of P west of Wisconsin were shifted to residential (the bright red was a type of residential zoning). But 36th St. and the eastern edge of P St. remained commercial.

And finally in 1958, the Zoning Commission adopted the map that would not face a major rewrite until 2012: 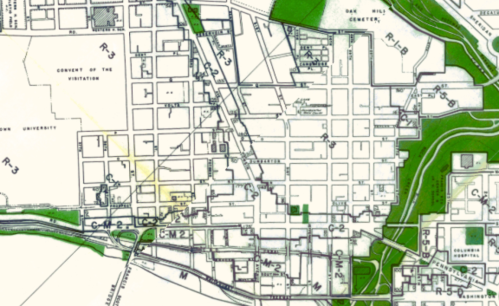 It’s not terribly easy to see (here’s an interactive map that is easier to read) but the commercial zones of 36th St. and P St. were scaled back even further. This is essentially the map that we have today (albeit with new names).

There are several things to take away from these maps. Firstly, as mentioned above, they acknowledged that commercial activities took place in the residential streets. But they absolutely did not attempt to reflect all the commercial activity around the neighborhood. Sara’s and Scheele’s markets, for instance, were open and operating throughout this time. But their blocks were zoned residential. As GM has started to document, there were commercial establishments all throughout the neighborhood. By refusing to document them in the maps, the Zoning Commission essentially made them illegal.

While this act no doubt contributed to the conversion of dozens of these shops, doctor’s offices, etc. to residential, some carried on by way of a grandfather clause. In short, as long as it was commercial before the act and it stayed open as commercial, it could remain commercial. Without this weakly tailored exception, we wouldn’t have Scheele’s, Sara’s, Stachowski’s, Dent Place Market, Saxby’s, Georgetown Hairstyling, Bredice Shoe Repair, Down Dog Yoga, and all the other small shops tucked into the neighborhood.

And that brings us back to Call Your Mother. This block of 35th has been largely commercial since well before the zoning laws were adopted. You can see it in the architecture. The building that Call Your Mother would like to use was constructed in the 19th century specifically to be a grocery store, which is how it was used until the 1970s. The building where Saxby’s is was a drug store. This was (and is) a commercial strip. Frankly it was an oversight for it to have been not zoned commercial in the first place.

And it is these old corner markets and barber shops that made Georgetown what it is. It was a rejection of the neighborhood’s history to legislate them out of existence.

(This is not even getting into the gigantic absurdity of how the zoning laws made Georgetown University–an institution well over 100 years old when the first zoning laws were being adopted–also technically illegal. It was one thing back in 1920 when they had only a handful of zones, but now there are dozens. For the Zoning Commission to keep GU zoned residential in 2012 instead of simply coming up with a new zone for universities shows that the system is all about using arbitrary and absurd fictions to control behavior.)

If anything, the zoning laws should have made it more difficult to convert old commercial spaces to residential rather than the opposite. Having more shops in the neighborhood would be good thing! It would enhance the livability of the neighborhood and reduce unnecessary driving. Further, the reduced rents these spaces typically demand make neighborhood-serving retail more feasible than it is on high rent streets like M or Wisconsin. And yet at the BZA hearing, a witness testifying against Call Your Mother spoke favorably of the conversion of old commercial spaces to residential and suggested that it would be better if the first floor of the property were turned into a living room instead of a corner shop. For all the talk of how much Georgetowners love history and want to preserve it, that love is often incredibly skin deep. As soon as preserving something genuinely historic, like a corner commercial building, impinges on parking or a desire not to have people around, the love of history is cast aside.

It’s too late for all those former spots. And it’s probably unrealistic to expect the Zoning Commission to redraw the maps to properly reflect the large numbers of historic commercial buildings throughout the neighborhood. So barring all that, we can only ask that the BZA defend the neighborhood’s history and allow Call Your Mother to open.

There’s no doubt that these neighbors feel genuine anxiety over the impact the store might have. But living in Georgetown is about trade-offs. GM has noticed that it’s been more difficult to park on his block since Via Umbria and Zannchi opened around the corner. Sure it’s a bit annoying when looking for a spot, but it also means that a fabulous Italian market and Korean restaurant is thriving steps from GM’s house.

There are lots of places in the world with pretty homes and absolutely zero street life. But Georgetown doesn’t and shouldn’t have to be one of them.