This week on Georgetown Time Machine, GM is exploring a great photo of the former Precint 7 Police station that stands on the 3200 block of Volta Place.

The photo comes from the Historical Society of Washington, DC, and is specifically from the fantastic Henry Wagner photo collection. Mr. Wagner lived with his family on M St. during the turn of the 20th century. This particular photo comes from between 1900 and 1910.

The police station was closed in 1976, a result of the opening of the new precinct headquarters at Idaho and Wisconsin Ave. in 1974 (which is still the headquarters of what is now called the Second District).

As mentioned in the Post article, the building was 87 years old as of 1978, which means it was constructed circa 1891. And thus it was only about ten years old at the time of the photo above.

Despite the speculation in the article about the building being razed, it was in fact preserved, and incorporated into a series of rowhouses designed by Robert Bell. You can see the original building easily today: 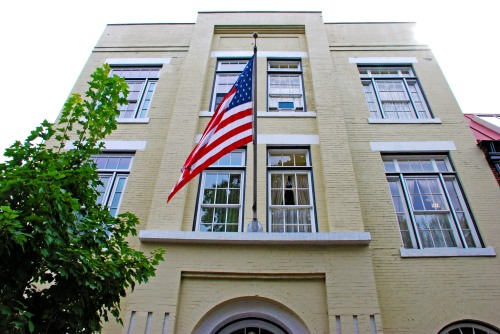 What’s interesting to GM is that the archway that is now adjacent to the building is not original.

GM was always told that this was a passageway to the parking lot behind the station. And it certainly was. But the design always made GM assume it existed at a time when horse drawn carriages passed below it. Yet unless it was built soon after the original photo above, it probably only saw cars, not buggies.

Another fun article GM found about this property is from 1938:

It tells the story of a new police captain moving into the station and being dismayed at the sorry state of the adjacent vacant lot. He enlisted his lieutenants to grow a flower garden. And where weeds and abandoned cars once stood, hollyhocks and begonias grew. “Visitors are always welcome” it concluded.