This week for Georgetown Time Machine, GM is checking out lower Wisconsin Ave. at the turn of the last century. The photo comes from the Historical Society of Washington, DC, and is part of the Henry Wagner collection.

The photo is looking south down Wisconsin from just above Grace St., which you can see to the right. You can also just make out the front lawn of Grace Episcopal.

You can see that the street was surfaced with pavers (i.e., smooth cobblestones) and that there was a streetcar line running down the center. These tracks were used by the Georgetown and Tenleytown Railway:

At the bottom of the hill you can see a building where there isn’t one now: 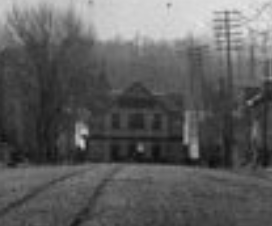 This was the Columbia Athletic Club. Or, depending on the exact year of the photograph, it could be the Georgetown University rowing house. This history was described by Georgetown in an exhibit on rowing:

The boathouse, located at the foot of 32nd Street on government property, was purchased from the Columbia Athletic Club in the spring of 1901. According to the College Journal, it consisted of three rooms – the boat room, ball room and locker room. The boat room had ample space for the six eight-oared, five four-oared, one centipede, four out-riggers, two four-oared, and two gunwale boats, together with a fifty-foot ten oared barge. Georgetown used this boathouse until July 1904 when it was razed.

116 years later and Georgetown is still hunting for a boathouse!