This week on Georgetown Time Machine, GM visits an oddity that once plied the waters of the Potomac: Georgetown University’s floating boathouse.

The photo, taken from the front page of the Evening Star from March 11, 1906, came to GM’s attention by way of a wonderful new research tool. It’s an image search tool now available for newspapers in the Library on Congress’s archive. You can plug in a subject, and the tool will identify photos containing that subject from hundreds of newspapers from 1900 to 1963.

But that building was razed in 1904. Why get rid of a building so soon? It’s a tale as old as time:

You can read the full article here. But essentially this is what occurred: the business owners along Water Street objected to the boathouse since it apparently got in the way of their own wharves and made it difficult to load and unload boats. The owners further alleged that the boathouse was built without legal authority. Apparently at that time, DC law entitled business owners along the river to build wharves aligned with their properties. The boathouse was built on the section of the waterfront that aligned with the street, so it was actually public land. According the article, it was built by the Columbia Athletic Club in 1881 under authority of Samuel Wheatly, who was a District Commissioner (actually, Wheatly wasn’t Commissioner until 1888, which suggests the house was actually built later). The business-owners objecting to the boathouse claimed that Wheatly didn’t have the authority to authorize the construction (and rumor was that the Columbia Athletic Club never paid rent).

On top of the businesses objecting, the Baltimore and Ohio railroad wanted to build a spur line down Water Street, which would apparently have further necessitated the move. That line operated until CSX abandoned it in 1986. (It later became, of course, the Capital Crescent Trail).

Either way, by 1904 Georgetown University apparently saw the writing on the wall and accepted the need to vacate the property. It was torn down later that year.

According the article the school sought a location above the Aqueduct Bridge, which would be preferable both because it was closer to the school and because “less than a quarter a mile west of [the first boathouse’s location] there is a sewer, from which pour the majority of Georgetown’s waste.” (There still is!) The site above the bridge was viewed to be cleaner and would “afford the boys an excellent opportunity for swimming after the practice.”

So two years later the school obtained a replacement boathouse. But unlike the previous boathouse, this one floated:

The boathouse had a surprising history. It was originally a houseboat built for Samuel Langley. Langley was an aeronautical innovator who made several attempts to create the first manned aircraft:

The Wright Brothers successfully made their first manned flights nine days after Langley’s last attempt from the houseboat on December 8, 1903. Georgetown acquired it sometime thereafter and converted it to rowing use.

But perhaps the houseboat was just cursed. Within the first year of it being moved to its new location it sunk. 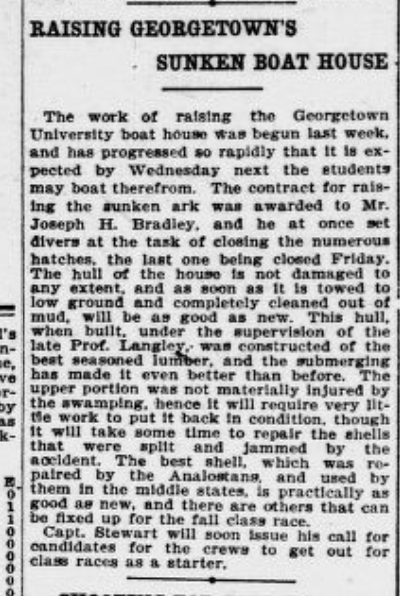 Even after is was raised from the depths, it did not have much less a cursed existence. It was destroyed in 1911:

So it really is fitting given this history that Georgetown University has spent fruitless decades trying to get a boathouse built pretty much at the same location that the doomed floating boathouse once bobbed (literally due to “RESIDENTS MAKE COMPLAINT“). Time is a flat circle, man.