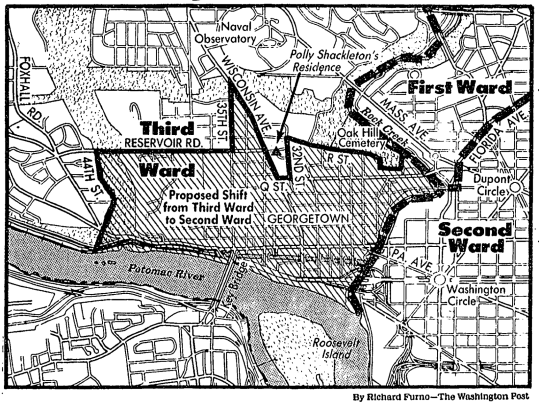 With the 2020 Census wrapping up, the contentious steps of reapportionment are on the horizon. And while DC sadly does not have any Congressional reapportionment to worry over, we do need to redraw the ward boundaries again. And given the huge population growth in other parts of the city, it is not beyond the realm of possibility that Georgetown could rejoin Ward 3.

The reason to redraw the ward lines is that the city is required by law to maintain roughly equal populations for each. So essentially the city takes the total population counted by the Census and divides it by eight. That resulting number is the target population each ward must meet by either growing or reducing in geographic size. So, if a ward grew faster than the average, then it has to be reduced in size to bring its total population down.

But reducing or growing a ward isn’t done in isolation. That land has to come from or go to another ward, which itself might need to grow or shrink irrespective of what the first ward needs to do. So needless to say it’s a complicated matter! And that’s just talking about math and geography. It gets exponentially more complicated when politics enter. And next year will likely be an explosive year on the politics front, as GM will explain.

Before that, though, some of you might be surprised to hear that Georgetown was ever in Ward 3. Indeed it was. It was originally in Ward 3 from the start of Home Rule. Most of Georgetown joined Ward 2 after the 1980 Census. Most, but not all. A tiny part of Georgetown remained part of Ward 3. It was called the Shackleton Sliver because Ward 3 Councilmember Polly Shackleton lived there. She arranged for it to remain in Ward 3 because she didn’t want to redistrict herself out of a job. (Read GM’s 2016 article on this fascinating story, as it will be a perfect preview for what 2021 will bring.)

The Shackleton Sliver (and Burleith) were eventually added to Ward 2 after the 1990 Census (and Shackleton’s retirement). No redistricting since has led to any serious discussions of Georgetown being moved back to Ward 3. This is probably mostly due to the numbers not supporting it, and also Jack Evans finding himself in the same position as Shackleton in terms wanting to keep his job.

Well, both those factors will be quite different next year!

The population growth in DC over the last ten years has been huge. But it’s been really huge in Ward 6. The final numbers are obviously still being tabulated, but estimated population numbers are already available, and they tell a clear story. The overall population of DC as of last year was estimated to be 717,989. That would result in an average ward size of about 89,000. And look at the estimated ward populations with the variations from the average in parentheses:

Ward 6 is way too big. This is mostly driven by the massive development around the Navy Yard and Waterfront. That ward giving up land will be the biggest change next year. One way it could give up land would be for those two neighborhoods to be transferred to Ward 8. This would be a potentially explosive situation, one some are already raising alarms about! (In short: the very white, and well off Navy Yard residents will probably raise hell about joining Ward 8, the poorest and least white ward. And plenty of Ward 8 advocates might worry about the affect having these new voters in their ward would have. A similar dynamic occurred with Georgetown and Ward 2 back in 1980.)

Ward 6 could also give land to Ward 2, since they border each other. In fact, after the 2010 Census, Ward 2 had grown the fastest and needed to shrink. As a result parts of Shaw were transferred to Ward 6. That could be reversed next year.

But Ward 2 can’t take that much since it is also above the average. (There’s some wiggle room since the final numbers need only be within 5% of the average, which would allow about 4,400 above or below.) But it could take a lot of Ward 6 if it gave up land in other parts to different wards.

And that brings us back to Georgetown, which remains from 1990 the western border of Ward 2. Ward 3 next door actually fell below the average as of 2019, and thus could take some more land. Could that result in Georgetown being the grease that eases the fight over Ward 6?

For one thing, Georgetown and Burleith have about 16,000 residents. If Ward 3 took all those residents it would have to give up residents in other parts. Parts of Chevy Chase DC are still a little salty about being moved into Ward 4, and would likely clamor to rejoin Ward 3 before Georgetown.

Another thing is that while Brooke Pinto is not a Georgetown resident, she largely owes her victory last spring to Georgetown voters. She is not likely going to give up that base.

(One possibility, though, would be for Burleith to join Ward 3 and Georgetown remain in Ward 2. It could remain in the same ANC, which would be renamed something like ANC2/3E).

But it’s not out of the question. And while the fireworks start raging over Ward 6, don’t be surprised to see Georgetown on the bargaining table.