Sandlot Will Need to Thread the Needle 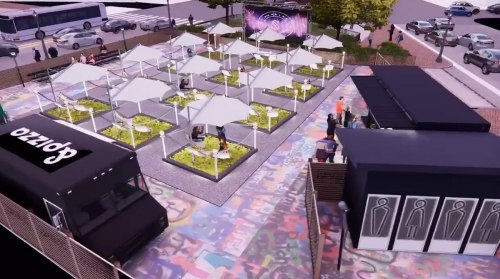 Yesterday, DC Urban Turf reported that an outdoor bar/food hall has been proposed for the now vacant lot where the Lukoil Gas Station stood at M and Pennsylvania.

Suite Nation is working on bringing its Sandlot brand to Georgetown next year, at the former site of a gas station at 2715 Pennsylvania Avenue NW (map). Similarly to Sandlot Southwest-turned-Sandlot Southeast, Sandlot Northwest will have outdoor seating, a bar and restrooms retrofit out of shipping containers, and will host food trucks for its patrons.

Here is a splashy rendering that the man behind the idea tweeted out earlier this week:

#SandlotNorthwest loading… located directly across the street from the Four Seasons/Bourbon Steak where the old gas station used to be. Stepping in 2021, our mission of 10+ years remains consistent: Repurpose w/ a Purpose for the Community. cc: 🎧🎺🎤 @Wale #GeorgetownPress pic.twitter.com/ib80eEcGyi

When GM first heard of this idea, he got the Sandlot mixed up with the Bullpen. Both are outdoor gathering spots near Nationals Park, but the Bullpen is a somewhat notorious and bro-y frat party venue, whereas the Sandlot is a more sedate locale. So GM was relieved to discover his mistake.

That said, outdoor bars still can cause issues. It will take some good planning on the part of the Sandlot people to ease the nerves of those nearby. Noise is obviously the primary concern that would be raised. Even a relatively sedate outdoor drinking establishment is bound to attract its fair share of loud crowds. Exactly what liquor license it would use and what restrictions it would face is another obvious question. Would it need a tavern license since it might not meet the food sales requirements of a restaurant license? If so, can it get one?

Aesthetic concerns are probably also going to be raised. Seeing as the design calls for shipping containers converted to food commissaries it’s bound to rile up the traditionalists. But since the plan is for it to use temporary installations, it’s unclear whether bodies like the Old Georgetown Board would even have the authority to review it. And besides, this whole idea came about because Eastbanc has delayed the construction of its planned apartment building for the site. That building is unlikely to be particularly well liked either! So perhaps some will welcome the respite.

The Sandlot plan has potential. The streateries have shown that well done outdoor dining is very popular. And it could be a crucial tool in attracting people back to Georgetown to save our retail corridors. But it will take some careful threading of the needle by the organizers.

2 responses to “Sandlot Will Need to Thread the Needle”