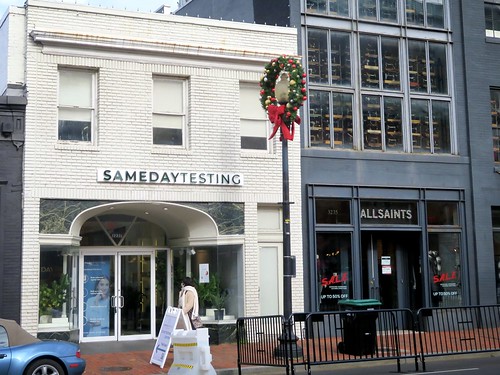 Do you need to get a Covid test? Do you like spa-like experiences? Why not both? That’s what’s waiting for you in the storefront of a former shoe store on M St.

Same Day Testing has set up shop at 3237 M St. in the former Aldo Shoes. Last week GM, in an abundance of caution following (masked and outdoor) exposure to someone who later tested positive for Covid, decided to give the service a try and here are his observations:

Setting up an appointment was super easy. Literally a half hour after Googling for the company, GM was in the waiting area. And he was blown away at how the how experience was like some sort of a spa:

The seating area is tastefully decorated with a random assemblage of stuff, including what looked to be an antique chestnut roaster. And quiet EDM music was piped in through unseen speakers. Within ten seconds of entering, GM was checked in by way of a QR code texted to him when he made the reservation. He was then directed to take a seat in one of the faux leather chairs along the wall.

But the wait was exceedingly brief. Within another thirty seconds he was called back and introduced to the testing technician. She explained how the test would go, specifically how far up his nose the swab would go (about an inch and a half).

The actual testing was moderately uncomfortable, with the swabbing lasting about five seconds with each nostril. GM’s eyes got a bit teary and he felt second away from sneezing right into to poor technician’s face, but happily that did not come to pass.

And like that he was back out the door. The whole experience took fewer than five minutes. And it wasn’t like it was simply a slow time. About half a dozen other people passed through in the same time.

The company billed GM’s insurance directly, however you have an option to pay up front to get quicker results. That doesn’t seem like it’s worth it to GM, especially in retrospect since he got his results within 24 hours. (It was negative).

So if you need to get a test, and don’t feel like schlepping to your doctor’s, or just want to have a bizarrely spa-like experience, consider this option.

One response to “The Testing Spa”