Over the last week, a spectacle has emerged in front of 3614 Prospect St. Where once sat a couple nondescript boxwood bushes now stand two larger than life sculptures. Specifically, as you can see above, they are sculptures of Bumblebee and Optimus Prime from the Transformer movies.

It may be hard to gauge just from the photos how large these things are, so GM had his daughter pose with the Autobots: 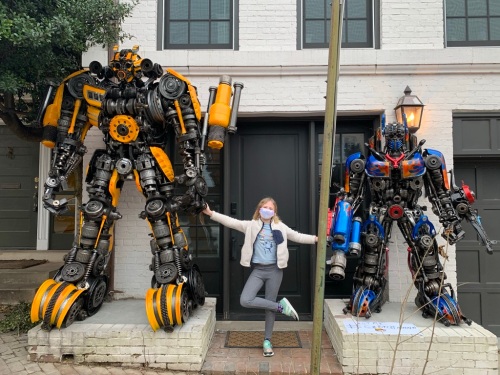 The one of the right is probably about 6 feet tall, but the one of the left is easily 10 feet. (GM’s knowledge of the Transformers is limited to the TV show of his youth, but he was under the impression Bumblebee should be shorter than Optimus Prime.) True to their inspiration, the sculptures are more than meets the eye, since they are not simply some gigantic cast moulding, but are literally made up of what appear to be actual auto parts:

It must weigh a ton.

You might want to swing by relatively soon to get your own pics. GM is informed that the neighbors are not too excited about the additions and are exploring ways to have them removed, either by way of historic preservation or public space rules.

So for now, at least, you can actually say that the Exorcist House is no longer the most interesting house on the block.