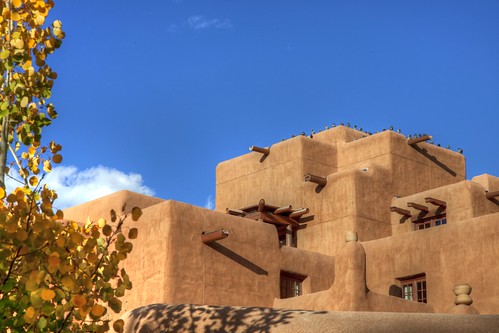 There are few cities in America that are quite as different as Santa Fe is from Georgetown. The New Mexico city is full of adobe structures in the style of those built by the Pueblo people for centuries, and Georgetown is full of brick homes mostly built in various Victorian styles. But there is a common thread woven in both communities, and it’s one that has had unforeseen consequences in each: historical preservation. GM was alerted to this connection by a fascinating recent podcast by 99% Invisible: Stuccoed in Time.

GM has discussed the history of preservation in Georgetown often, but in short: the neighborhood experienced an economic decline in the late 19th century into the 20th, which left the neighborhood somewhat frozen in time, architecturally speaking. With the rise of interest in early colonial design and architecture in the 1930s (particularly with the restoration of Williamsburg, Virginia) coupled with the arrival of a great number of New Dealers attracted to Georgetown’s old homes and convenience to downtown, a movement to preserve Georgetown began. This movement culminated in 1951 with the adoption of the Old Georgetown Act, which has governed how the neighborhood has developed ever since.

As retold in the podcast, Santa Fe’s story is not so far off, although it starts off quite different. In the late 19th century, New Mexico was engaged in a decades long campaign to convince Congress to admit the territory as a state. As part of that effort, the state felt that its traditional adobe style architecture was holding it back and so it began constructing buildings with a more European and modern style in Santa Fe.

While this perhaps helped the state in the short run in its successful bid for statehood, the city found that its tourist industry was hurt. A landmark commission in 1912 concluded that tourists were attracted to the traditional Pueblo architecture, and so it recommended not only that the city preserve existing adobe structures but should also mandate that all new structures by done in the same style.

But like what occurred in Georgetown with the Black population, this preservation ultimately led to a clearing out of the Pueblo people and their culture. The city became too expensive for the Pueblo people themselves to continue to live there. As GM has said previously, preservation is fantastic as keeping structures around, but terrible as keeping all the rest of the things that make up a community. If you don’t couple preservation with an active effort to keep people too, all you will be left with is pretty homes full of rich people (and/or empty homes merely owned by rich people).

GM highly recommends you listen to the podcast, and contemplate how preservation has succeeded and failed in both places.