Not So Long Ago: Wisconsin and Prospect

This week for Not So Long Ago, in honor of the new iPhone 5 that probably will be announced this week, GM stops by the Apple store.

Nowadays this stretch of Wisconsin Ave. hosts Ann Taylor Loft, the Apple store, and Nine West. GM can’t make out what was in the Ann Taylor Loft. It appears that there was a store called “Black and White” on the upper floors.

As for the actual Apple store address itself, there stood a building that Apple knocked down to build its store. GM believes that building was built in the 1980s and replaced a parking lot. In 1993, it hosted a diner called Boogies. One commentator described it thusly:

In the early 1990s, there was a branch of Boogies Diner in the Georgetown section of Washington, DC. They tried to sell trendy clothes in a diner atmosphere.

The clothes smelled like grease, and the restaurant area smelled like leather. Suffice to say, the concept did not work.

It lasted less than a year. Enough said.

According to this article, it opened in 1990, so the 1993 photo testifies to at least three years of greasy leather and leathery food. Sometime after 1993, the French Connection UK moved into this space (and occupied it until Apple bought the property). GM’s not sure if anything was in here between Boogies and FCUK, but if there was it probably wasn’t for long.

Finally, on the right in the space where Nine West currently is there was nothing.

Here are the photos: 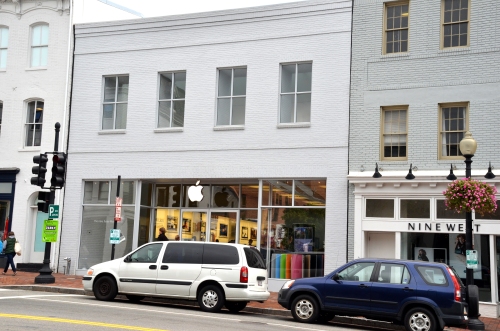 5 responses to “Not So Long Ago: Wisconsin and Prospect”