Not So Long Ago: Wisconsin and Dumbarton

This week for Not So Long Ago, GM moves down Wisconsin Ave. a bit further. The main subject of the photo was the subject of some recent news: the old Georgetown Theater.

As you can see, while the theater (and more particularly the sign) wasn’t in great shape in 1993, it has significantly degraded since then. It looks like pretty much nothing has been done to the facade of the theater except neglect by the Heon family.

One of the bits of news about the theater that came out in this recent attention is that the National Jewel Center is moving out by the end of the month. It’s interesting that in 1993, both the two stores to the north of the theater were also jewelry stores. Nowadays the stores are still of the run-down cheap variety that populate this section of Wisconsin, but they mostly sell clothes. In GM’s opinion, like the theater they look a lot worse now. 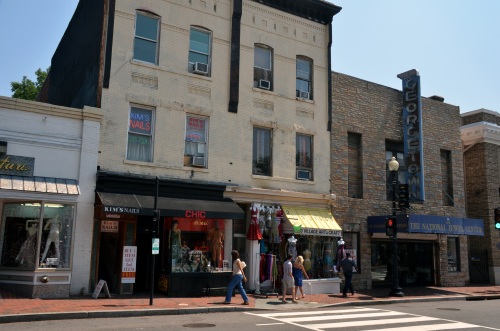 Old Georgetown Theater, Soon to Be Empty, Still For Sale

Way back in 2009, GM reported that the Heon family was quietly trying to sell the historic Georgetown theater building, which they’ve owned since 1949. At that point, the price was quoted at $4.9 million.

Skip to today, and according to PoP the building is still for sale. He was unable to determine the current price.

GM had heard that vendors the National Jewel Center were slowly shutting down business. And now Silverman confirms that all the jewelers will be out by the end of August.

Everyone’s got a favorite candidate they’d like to see replace the Jewel Center. Having the space return as a theater is probably the most common refrain. But GM’s heard ideas ranging from a music venue to a DC location of NY’s Eataly concept.

All these are great, if not likely, ideas. But they ignore the fact that the building is a complete and utter wreck inside. A total gut job is required. And then you have you ask yourself, why even bother? While the decrepit neon sign is a landmark, and its restoration would be great, the rest of the facade is not worth saving. It’s a 1950’s renovation that uses ugly formstone (it’s the fake brick stuff you see all over Baltimore). It’s not historic. What was historic was the facade of the Dumbarton Theater that they destroyed to put up the ugly fake brick veneer: 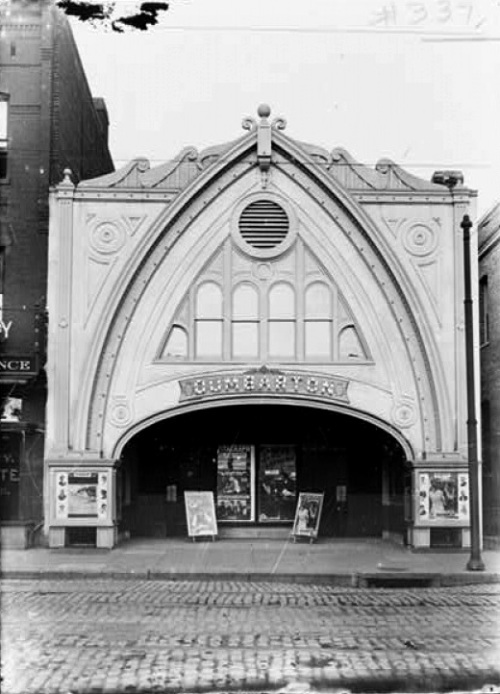 This was an utterly fantastical church of entertainment. Looking like a mix of a bishop’s mitre and birthday cake, it was a facade completely out of place in Georgetown, which probably made it an absolute magnet on Saturday afternoons. That was something worth saving. But it’s gone. END_OF_DOCUMENT_TOKEN_TO_BE_REPLACED

ANC Round Up: Let There Be Neon Light

The ANC met last night for the final time in 2009. After a year of contentious fights over topics from the Apple store to drunken alumni parades, the final meeting last night seemed a bit anti-climatic. But that’s not to say there were no interesting developments.

The most exciting item on the agenda was the proposed renovation of the Georgetown theater sign. The iconic sign at 1351 Wisconsin has not lit up in many years and has slowly rusted away. The plan discussed last night would fix that.

The BID is kicking in $50,000 to restore the landmark. There’s a bit of deja vu with this since several years ago another plan was floated to renovate the sign, but never got off the ground. Let’s hope this time is different.

The sign will be repainted in its original black color and the neon lights will be their original “rose” color.

When (jokingly) asked whether this meant the theater was coming back too, the architect laughed and said he couldn’t say. (Translation: no).

GM is thrilled that this sign will be returned to its former glory. A little more clarification on what is going to happen to the building it’s attached to would be even better. END_OF_DOCUMENT_TOKEN_TO_BE_REPLACED 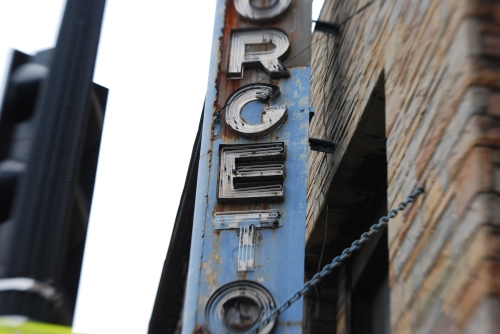 While your belt may still be a few notches too tight from Thanksgiving, the ANC will still be back and open for business next Monday night. The agenda was released yesterday, and while it’s not quite the cornucopia that last month’s was, it’s still got some interesting topics.

Apparently there is an application pending with the Old Georgetown Board regarding the, well, old Georgetown Theater neon sign. Hopefully it means that the owners, the Heon family, are planning on restoring the iconic sign to its former glory. As reported here, the building was put up for sale this summer. GM wonders where this application fits into that plan. END_OF_DOCUMENT_TOKEN_TO_BE_REPLACED

The historic Georgetown Theater property on Wisconsin Ave. has been put up for sale. Currently it houses the National Jewel Center, but before that it was a working theater that was infamous in the 1970s for showing the x-rated film “Caligula” over and over again until the film broke. Prior to the 1950’s, the theater was called the Dumbarton Theater and looked like this:

Courtesy of the Library of Congress