ANC Round Up: Seeing Signs Edition 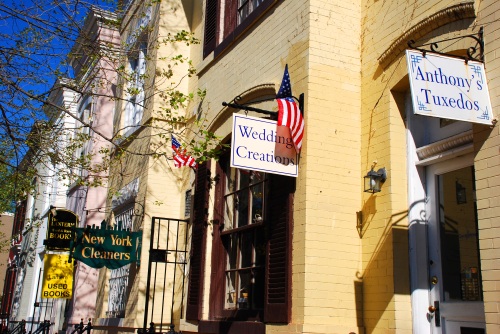 Last night the ANC met for its last meeting of 2012. It was also the last meeting for Commissioner Jake Sticka, who did not run for reelection this year due to the fact he’ll be graduating this spring. As is normal, the commission will honor him with a special commendation at the February meeting.

But he wasn’t gone yet. And he dutifully took notes through the length of the relatively uneventful meeting. (GM wonders if the next crop of student-commissioners will refuse to serve as secretary. They’ve been stuck with the job going at least as far back as Jenna Lowenstein.)

One of the more substantive topics on the agenda last night was the city’s proposed signage regulations. This is something GM has mentioned briefly before. In short, the city is proposing the adoption of signage rules for the whole city. Technically speaking signage rules are nothing new for Georgetown. But too often they are more honored in the breach than the observance. The new rules would bring some more vigor to the rules, even those that already apply to Georgetown.

Last night the ANC voted to submit a letter supporting the new rules with some proposed changes. For instance, the ANC’s comments suggest that neon signs should be banned unless they meet certain criteria such as being the only sign on the store identifying the store name (like Bridge Street Books does). Additionally, they suggest that sandwich boards should be kept off of the main drags but remain allowed on the side streets.

(Full disclosure: GM drafted CAG’s comment letter on the same rules. CAG took a more conservative approach. For instance, rather than list exceptions out to the blanket prohibition on electronic signs, CAG suggested the rules be drafted to make it clear that the Old Georgetown Board’s review standards should apply.)

Everyone is in agreement that something needs to be done to crack down on the proliferation of ugly and illegal signs. Hopefully these rules can lead the way. END_OF_DOCUMENT_TOKEN_TO_BE_REPLACED Next week, the ANC will meet for it’s November session. And one item jumps way out from the rest: a new music venue called Gypsy Sally’s.

According to the liquor license application, the venue will be on the second floor of 3401 K St. That’s the address of the future Malmaison (and once Hibiscus Cafe). It will be a “restaurant with a seating capacity of 224 seats, [with a] total occupancy load of 284. Requesting an entertainment endorsement featuring live acoustic music with cover charge. No nude performances.”

(GM doesn’t know for sure, but the somewhat un-PC name probably comes the song Tecumseh Valley by Townes Van Zandt)

If any new live music venues has any chance of getting through the approval process, picking a location like this is probably the best first step. There’s no immediate residential neighbor. However, there is a condo building a couple doors down. And during the approval process of Malmaison there were concerns expressed over the noise of people coming and going from the new restaurant. Additionally, another point of contention was the number of reimbursable detail MPD cops the restaurant would hire.

If approved, this of course would not be the first music venue along K St. From 1953 to 1998, the Bayou stood at 31st and K. Will Gypsy Sally’s live up to that reputation? We’ll see. END_OF_DOCUMENT_TOKEN_TO_BE_REPLACED