Showdown at the Zoning Commission Tonight on Campus Plan

Tonight’s the night that the Zoning Commission finally starts to reveal its hand and move towards making a decision on the GU campus plan. The meeting starts at 6:30 pm and it’s at One Judiciary Center. Or you can just watch it from the comfort of your computer here.

The Commission may not reach agreement on all the matters in the plan, but it is likely that tonight’s meeting will give the public a good sense for where the commission will end up.

The public is not allowed to speak tonight, but if you’re really into this issue and want to show support for your respective side, you ought to get down there.

Last night the ANC testified before the Zoning Commission on the Georgetown University campus plan. You can watch it here.

In many ways, this was a presentation years in preparation. Commissioners Ron Lewis, Bill Starrels, Jeff Jones, and Ed Solomon each spoke, but it was Ron that carried the heavy load. Where the Office of Planning’s case was undermined last week due to an apparent lack of preparation, nothing of the sort was on display last night.

Essentially the story that the ANC put forth was this: the 2000 campus plan was adopted on the promise that it would remedy an existing problem with students in the neighborhood. The ANC argues that not only did the plan not address the existing problem, the school took advantage of the lack of an overall student cap and grew every category but traditional undergrads as much as possible. Thus, they argue, the situation with the undergrads are at best no better than they were before the 2000 plan, and in the meantime, a new problem with excessive graduate and non-traditional student growth has produced a new problem. END_OF_DOCUMENT_TOKEN_TO_BE_REPLACED

Last night the Zoning Commission held its second hearing on GU’s proposed campus plan. You can watch it here (sorry GM can’t embed it for some reason, and you’ll have to install Microsoft Silverlight to watch it, but it’s worth it).

The main attraction of the night was the testimony of the Office of Planning. As discussed here, that office issued a report devastating to GU’s position. So it was very interesting to here what they had to say about their report.

The main speaker for OP was Jennifer Steingasser, who was apparently the main drafter of the report. Her testimony begins around the 1’12” mark of the video.

In her speech she emphasized several aspects of OP’s report. She explaining that she welcomed GU’s move from using an average to an absolute in calculating the student cap. But she argued that rather than use either of the methods suggested by GU or the ANC, such as the full-time equivalent calculation, they should simply count the number of students absolutely.

She explained that OP rejected the GU hospital element of the plan because it was clearly just a placeholder and none of the specifics had been fleshed out. She stated that any major development there should be handled by an amendment. END_OF_DOCUMENT_TOKEN_TO_BE_REPLACED 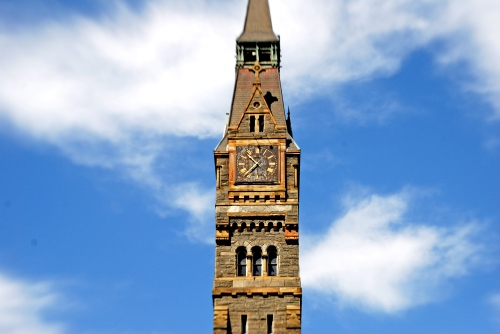 This week, the Zoning Commission hearings for the proposed Georgetown University campus plan will begin. These hearings will be an opportunity for government agencies, the school, community groups, and the public to testify for or against the plan. The first of three hearings will be this Thursday at 6:30 pm at the Zoning Commission’s hearing room at 441 4th St. NW, Suite 220-S.

This first hearing was expected to be dominated by the school’s presentation and the ANC’s. However, due to the school’s recent changes to their proposal, the Office of Planning is delaying the issuance of its report on the plan. As a result, the ANC has requested and been granted a postponement to their scheduled testimony. Now the Office of Planning is expected to file its report on May 5th and to testify on May 12th (at the same time and location as listed above). The ANC will testify afterwards. END_OF_DOCUMENT_TOKEN_TO_BE_REPLACED

The Georgetown Current reports today that the Zoning Commission adopted the much-hated gun store zoning rules. Instead of the 600 feet from churches, schools, etc. that the ANC and others encouraged, the Zoning Commission adopted only a 300 foot buffer zone. As a result, retailers will be able to open a gun store along large portions of M St. as a matter of right. But don’t worry, you won’t even know they’re there! Find out why after the jump: