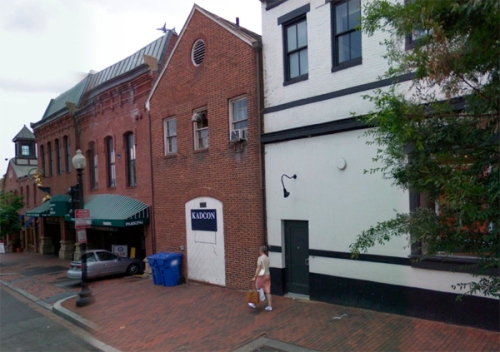 As mentioned briefly a little while back, Capitol Restaurant Concepts, owners of Georgetown landmarks J. Paul’s and Old Glory among others, has been long planning to open a bakery at 1078 Wisconsin Ave. Since it’s been a slow newsday for Georgetown, GM is giving this tidbit it’s own post.

CRC bought the property back in late 2007. It previously served as the kitchen of the City Tavern Club around the corner. As you can see from walking by, it’s a long way from opening.

No objection to issuance of permit for proposed alterations, including new storefront with bay window projections into public space, second floor windows/doors, and skylight, as shown in supplemental drawings dated 16 January 2009 which indicate retention of south wall and roof structure. New rooftop mechanical equipment must be located as to not be visible from public thoroughfare. New brick pavers on sidewalk must match existing pavers used on the DDOT Wisconsin Avenue Streetscape Project.

It still seems like a long way from opening, but it’s already got a name: Paul Restaurant (probably the same “Paul” as J. Paul’s [which was actually named after someone called “Paul J.”], but won’t that get confusing?).

It’s even got a page on the BID website.

Anyway, it’s a long way off, but someday, mes freres, we shall mange baguettes under the shade of La Republique Banane.

2 responses to “CRC to Open French Bakery on Wisconsin”