As “prequeled” yesterday, GM attended a brutal marathon-like ANC meeting Monday night. After a long warm-down run and a good night’s sleep, GM is now ready to give an account of the race.

Along the way, we’ll pass sewage pipes, cupcakes, and yet another rejected curb cut. Make sure to carbo load and stretch and GM will see you at the starting line after the jump:

The meeting started promptly at 6:30. Right off the bat, the girth of the agenda inspired many encouragements to cut to the chase, which were almost always immediately followed by long discussions cutting nowhere near the chase.

The first substantive presentation of the night came from a rep from Georgetown University on the question of student move-in trash removal. Apparently a garbage truck has been trolling through the West Village collecting trash from off-campus students. The rep also touted the fact that students could be fined between $125 to $300 for various violations and told residents to call 687-5138 if they have any issues with their student neighbors.

As discussed before, as a result of an EPA lawsuit WASA is obliged to conduct a massive construction project on Q St. from 27th to Rock Creek (among other projects). This is to stop harmful sewage from entering our waterways, like Rock Creek and the Potomac. On Q St., WASA needs to separate out sewage pipes that deal with sanitary sewage (i.e. stuff from us) from the storm-water sewage.

To do this the contractors will need to shut down stretches of Q St. In February there were three options put forward:

In his otherwise spot-on preview on Monday, GM predicted that WASA chose Option One and that they’d start in October. He was wrong on both counts. But in his defense, it was a trick question. Turns out WASA chose secret Option Four: keep two lanes of traffic open at all times. They will start in two weeks.

Here are the specific details:

As the race really settled into a early pace, the ANC quickly ticked through approvals for three events that will affect Georgetown streets in the near future: The Taste of Georgetown (10/10), Komen Cancer 3 Day (10/9), and Bike DC (10/17).

The only minor issue came up when Ron Lewis reminded the BID that the Taste of Georgetown was supposed to be a charitable event and that they should endeavor to make sure there still was a “substantial” charitable donation at the end of the day.

Last October, DC Council voted to ban the sale of small bottles (“singles”) of alcohol in Ward Two. A single is a bottle of liquor smaller than a pint and a bottle or can or beer smaller than 50 oz. ABRA has said that they will consider a waiver from the ban for any establishment that gets an ok from its ANC. As mentioned in March, the ANC and CAG was considering granting a Georgetown-wide exemption.

They have apparently backed off that position. It seems to GM that Bill Starrels never warmed up to the idea in the first place and is convinced that the singles ban has turned Key Park from a “drunkard’s paradise” (real quote) to a park with fewer “homelessly-challenged individuals” (also a real quote, although to be fair, he was trying to make a joke and it simply didn’t come out right).

Starrels and Lewis were strongly of the opinion that both the law and public opinion weighed against granting a ANC-wide waiver. Although to GM’s ears it seemed like they still talking more about the difficulty in a drink-by-drink waiver rather than a ANC-wide waiver as discussed in March. Nonetheless, it appeared to be heading to a conclusion before Charlie Eason spoke up and said that he’s heard complaints against the ban and that he thinks a ANC-wide waiver is still worth pursuing. To be continued…

Along the same lines, it appears that Johnny Rockets will get its liquor license approved. They apparently simply want to offer a couple beers and wine to avoid the “veto factor” wherein the dad forces the family to eat elsewhere because he just really wants his booze. Commissioner Skelsey was particularly worried about Johnny Rockets losing its atmosphere with the introduction of alcoholic drinks. GM is convinced that it must be the case that you have to be a parent before you could ever believe that Johnny Rockets has atmosphere, let alone worry about its future.

a little too much of the race left to run. That is about the same feeling GM felt before they even got done with page one of the agenda.

Thankfully he could zone out during the talk of the expansion of the Washington International School (not in his jurisdiction) and skip right to the Old Georgetown Board matters.

Despite fooling a certain other neighborhood blogger, Chez Mama San has been closed for a while. The owner would like to re-open the space as “J Chocolatier” and sell various chocolate goods. On the second floor will apparently be a separate art gallery called “Gallerie Chez M”.

As mentioned in yesterday’s prequel, Georgetown Cupcake unveiled their design for the erstwhile Starbucks location at 3301 M St.: 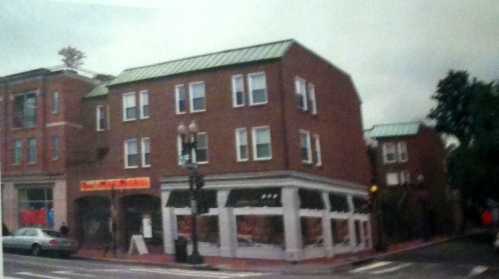 Let’s just say there weren’t lines forming around the block to compliment this design. Resident architect Bill Skelsey was particularly down on the design, but attributed it mostly to the ugly building they’re starting off with. GM agrees. The building is dreadful and this design makes it look more like a cookie-cutter mall chain store than a flagship store. The cupcakes are good, but GM also thinks that a good chunk of Georgetown Cupcake’s success has been built on its brand (cute, upscale, preppy, etc.). This building will not do its brand any favors.

Moving into the old Philadelphia Cheesesteak Factory space would have made a lot more sense.

After a blur of OGB projects that even a neighborhood blogger couldn’t find interest in, the ANC came to its final item: a curb cut application. This was actually the most interesting curb cut applications GM’s seen due to the fact that the architect found historical photos demonstrating that there was a curb cut even back in the 19th century.

No use though. The ANC still rejected the request and the poor owners ended up running a marathon for nothing.