If last month’s ANC seemed quick and efficient, this month was pretty much the exact opposite: slow and tortuous. In the end, not much happened, but any ANC agenda with the Apple Store on the agenda is significant in some way. Plus GM got a resolution passed! Find out more after the jump:

Cut to the chase GM, what happened with Apple?

Apple returned with plans significantly similar to last month’s. They made some very small changes to the brick work across the top of the facade (or so they said, it really looked no different) and they added features to the glass front to break-up the seamless expanse. They added two metal columns on either sides of the door, added a stripe across the window, and brought the windows up to the sidewalk (the doors would remain set back). Here’s a rough approximation of what the revised designs look like: 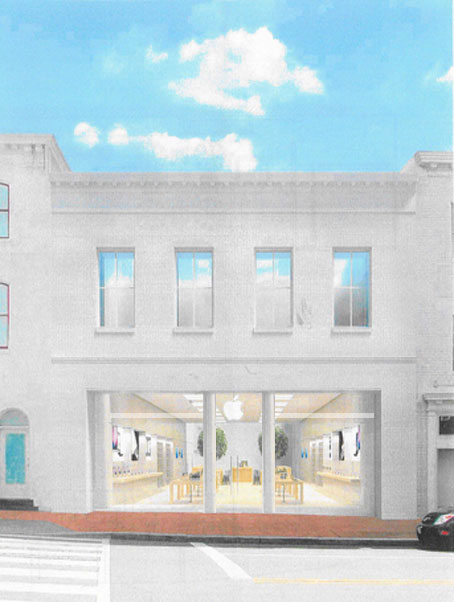 The general idea is to break up the glass expanse and avoid creating a “void” along the sidewalk. These details are kind of boring, but they seem to accomplish the goals of the Old Georgetown Board.

The ANC approved the designs. Again. But as we saw last month, the ANC’s views are not the be all end all. We’ll have to wait until Thursday to see if the OGB is satisfied.

So what’s this about a Georgetown Metropolitan pushed resolution?

Perhaps proving that you can accomplish anything when nobody else seems to care that much, GM talked the ANC into passing a resolution against the extension of the D2 to Union Station. Hopefully with both Glover Park and ANC 2E coming out against the change, WMATA will finally put the proposal to bed. Satisfying both his transit and civic nerdiness, GM is happy to know he played a role is saving the D2.

Ok now will you shut up about the D2?

What about North Face?

As first reported here, North Face is taking over 3333 M St. What they were specifically at the ANC for was approval for their signage. It looked essentially like this:

The ANC really objected to the giant red stripe down the left side. GM’s inclined to agree with them; it is a bit much. Commissioner Skelsey particularly objected to it, reminding the Commission that they had struggled long and hard with the builders of that building to come up with the limestone facade. Putting a huge racing stripe down the left side would take a lot of that accomplishment away.

Bonus for those not satisfied with having just, you know, freakin’ Patagonia already, should be happy to know the owners plan to open the North Face store in just two months. Georgetown students: rev up your credit cards!

How many crucifixes are there in the ANC meeting room?

Isn’t that an Establishment Clause problem?

You would think wouldn’t you, but then again GM only got a B in Constitutional Law, so what does he know.

Nope. They still are pretty much enemy number one in the lower West Village. Tonight they laughably tried to claim that deliveries only make up 5% of their business and that take out makes up only 5-10%. Meaning that the vast, vast majoirty of their business is sit down, despite the fact they only have a few table.

As an someone hoping to see more neighborhood stores, GM views situations like this as not helpful. They reinforce the fears among the NIMBYs that if you loosen up zoning in residential streets, you’re going to end up with a smelly noisy drunk-student hang out next door. The challenge to us that would support more neighborhood stores is to encourage processes to weed out the Philly Pizzas of the world from the back streets. Any urbanists out there have any ideas?

Blue blazer by 4 to 2. Skelsey, ever the independent, voted fleece.

Any odds and ends?

Funny you should ask:

16 responses to “ANC Round Up: Apple Redux, Reuse, Recycle”