Our Fantastic Waterfront Park is Complete

GM has mentioned a few times the opening of the final phase of the Georgetown Waterfront Park, but today he thought he’d talk about the whole park and how fantastic the finished product is.

First it’s important to remember what exactly was here before the long work to construct the park begun:

That massive building was the old Capital Traction Powerhouse. And you can’t quite see it, but train tracks from the old B&O railroad run right down K St. The rest of the waterfront was a mix of industrial buildings and mills. (GM’s written about a few of them). By the 1960s, this whole strip was condemned. And with the efforts of Senator Charles Percy (who died on Saturday), the long effort to bring us the park we now enjoy started.

Now back to today:

Starting at the far western end, the park begins with a set of paths and an interesting “streamgage”, which measures the height of the Potomac:

Moving on down river from the stream gage, you encounter the first of several etched stones showing historic pictures of the Georgetown waterfront: 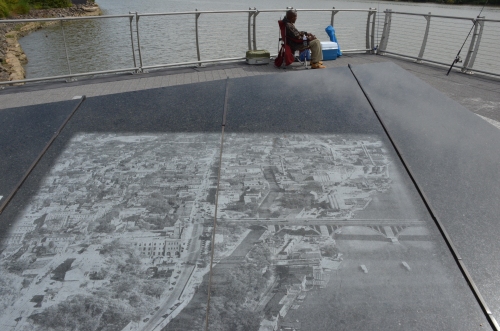 They’re subdued, and some might call the black slabs a little off-putting. Sure, a classic statue of, say, George Beall might have been a nice addition, but GM thinks the subdued slabs leave the scenery as the primary attraction.

As you can see in the above photo, this extension out into the river seems to attract fisherman. GM’s not sure he’d eat fish out of the Potomac, but to each his own:

Through the heart of the park runs a grove of leafy trees. They are almost all young, but in several decades the park will be home to large shade trees. Currently one large Sycamore hints at that future.

On this end of the park sits the Labyrinth, or as GM calls it: the giant green electric range:

Right next to the Labyrinth is a bench with a thought journal, where everyone is invited to add their words: 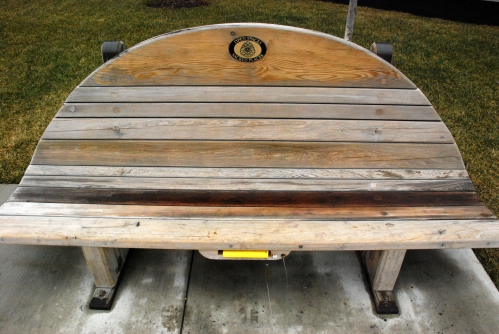 Moving down from the west end you approach the newly completely Phase II. The centerpiece is the new fountain:

This new feature appears to already be hugely popular with kids and adults. They love posing for photos in front of it or getting a little spritz from the spray (the kids, of course, just want to run through it). GM hopes that the planters are just temporary, because they take away from have the fountain blend in with the surrounding plaza, as the drawings promised:

Moving on from the fountain, you get to the amphitheater. It’s designed to allow you to watch crew regattas, but GM found the steps to be a little too steep:

The steps have to be tall enough to allow you to comfortable sit on them, but maybe they could install on set of normal stairs down the center or on the sides to make it easier to step down?

A nice touch are the stone bollards that look like large tie-downs you’d see at a commercial dock. It’s a nice homage to Georgetown’s old shipping past.

GM has heard some people suggest a floating dock could be brought in for concerts next to the amphitheater. He’s not sure NPS would go for it, but it could be a fun way to use the space.

Moving east from here is a large arbor over stone benches:

It’s planned that vines will grow up and over the arbor, but for now they aren’t likely to bring much shade. Also, as constructed the arbor is a bit undulating. This would appear to be intentional, but it’s subtle enough that it almost looks like the metal is buckling. Hopefuly once it’s covered in vines, that won’t be noticeable.

One of the revelations of the opening of Phase II is how well it flows right into the Washington Harbour building. In particular, the corridor in between the buildings now has potential to capture a lot of foot traffic if MRP can fill the stores with interesting shops or cafes. GM can’t believe he’s saying this about a building he generally despises, but it could even turn into  a modern version of one of those small alleyways you see all over cities like Vienna or Salzburg:

Ok, maybe not that good, but certainly better than what it is now.

GM started this article out talking about how the park is now complete, and officially it is. But he’d be remiss not to point out that there is still a plot of land between the western end of the park and the Key Bridge that is all the things the waterfront used to be, namely an ugly parking lot:

GM’s not aware of any plans to convert this into an extension of the park (and GM thinks DDOT might use this to store sand for the snow months). But ultimately the park won’t be truly complete until this is green too.

Still want to learn more about the park? Come to CAG’s meeting tonight. Tours of the park will be offered starting at 6:30. The meeting will then take place at the beautiful Potomac Boat Club next to Jack’s Boat House.

13 responses to “Our Fantastic Waterfront Park is Complete”