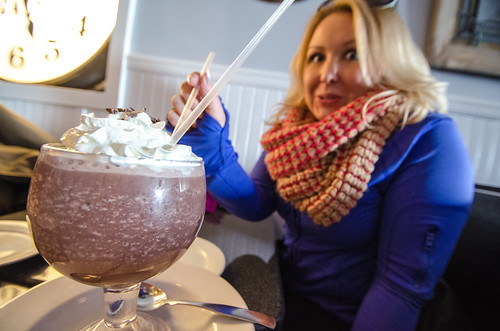 As GM mentioned briefly yesterday, Serendipity 3 has closed down. The Washingtonian had this to add:

There’s no word yet on why the home of the $1,000 “golden opulence” sundae locked its doors. Under Armour founder Kevin Plank recently bought the building that housed the sweets spot, as well as a luxurious home nearby. Rumors of the sports clothing store moving into Wisconsin Avenue and M Street, Northwest, have abounded since. We’ve reached out to the Under Armour team to find out more.

GM has since learned that they received confirmation back from Under Armour that the restaurant has closed. Citypaper dug in a little deeper and found:

that the landlord, 3150 M Street LLC, filed a lawsuit in the Landlord and Tenant Branch of D.C. Superior Court seeking to evict the restaurant on March 12. The complaint alleges the restaurant owed $98,921 from February 14 through March 31.

This is an ignoble end to what was a mostly disappointing saga. As you may recall, after kicking Nathan’s out and leasing the space to the new tenants (Britt Swann and Rodrigo Garcia) the space sat empty for over a year. Even at this point GM was already hearing rumors of dysfunction and speculation about whether it would ever open.

It eventually did open after pretty shoddy renovations and a terrible paint job. GM was never excited about the prospect of such a touristy restaurant, but he always figured it would eventually catch on with said tourists, and suburbanites to boot. But as an average walk by could tell you, that just never happened.

The sale of the building by the Heons to Kevin Planck, owner of Under Armour (and a Georgetowner), set the clock ticking as to when the restaurant would be shut down. That it happened this fast is only somewhat surprising.

Of course what is most sad about this is to remember how great of a local pub Nathan’s was. That they were kicked out over a rental dispute in order to make way for what ultimately was a failure is ironic. According to the complaint obtained by Citypaper, Serendipity 3 was paying $20,000 a month in rent. Nathan’s was paying $30,000 (or at least on the hook for that much). GM will leave it to Carol Joynt, former owner of Nathan’s, to speculate on an alternative history whereby Nathan’s was given the same deal that Serendipity 3 was, and Georgetown still got to keep a local landmark on that critical intersection.

Alas, in the real world we’re stuck with another dead corner for a long time, only to be filled with another store selling athletic clothes you can just as easily find online (probably).