The Missed Opportunity at the Social Safeway 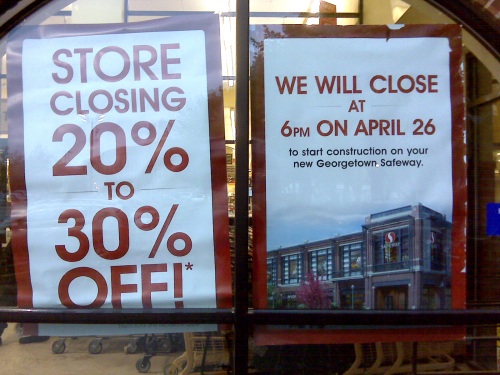 Last November, GM wondered what’s wrong with the upper Georgetown commercial corridor. One reader suggested that the lack of new residential units in the Safeway development was one contributing factor. GM agrees. But why wasn’t a residential component considered?

The Safeway itself has obviously done well. Most people who used the old Social Safeway probably continue to use the new one. There are more grocery options across the city than there were 10 years ago, but for western Ward 2/lower Ward 3, the Georgetown Safeway is still a solid option.

But as GM documented, the retail market around the Safeway has struggled. Noodles closed after only a couple years. The Roosters barbershop tucked away in the poor location off Wisconsin Ave. barely lasted a year. The northernmost street level space under the Safeway briefly had a Verizon store before it sat vacant for years (it now promises perfect eyebrows to come). Other spaces in the older buildings between the Safeway and R St. have also been vacant for years.

More residents in the immediate proximity would be a boon to businesses along this stretch of Wisconsin Ave., including those in the Safeway properties (that’s the grocery store building itself, plus all the buildings down to the Jos. A Banks.)

Residential could have been part of the development but some zoning relief would be necessary. The southern building (i.e. the old Noodles and the Jos. A Banks) is zoned C-2-A. That allows commercial and residential up to 50 feet, far more than the single story they went with. The lot occupancy, however, would have presented a problem since commercial buildings in C-2-A can use 100% of the lot (which the buildings use) while residential can only use 60%.

The other buildings are zoned C-1. This doesn’t allow residential at all except for group homes. It also only allows three story buildings.

Could Safeway have overcome these relatively minor difficulties? Probably. GM asked Craig Muckle, a Safeway representative, whether the company considered building residential. He replied that generally Safeway doesn’t reveal their internal considerations but that in this particular case a desire to rebuild the grocery store in “as short a time as possible” was a driving concern. He didn’t mention it, but the saga of the Cathedral Commons redevelopment by Giant up Wisconsin Ave. probably weighed in on the decision.

It’s not the case the Safeway simply doesn’t do residential development. The company proposed developing its Palisades location into a mixed-use project. Faced with community opposition, though, they dropped it and promptly put the property up for sale. (Although it doesn’t appear to have found a buyer).

Whatever reason they had for not adding a residential component, Safeway missed an opportunity to bring a lot more economic stability to this forlorn section of Wisconsin Ave.

One response to “The Missed Opportunity at the Social Safeway”