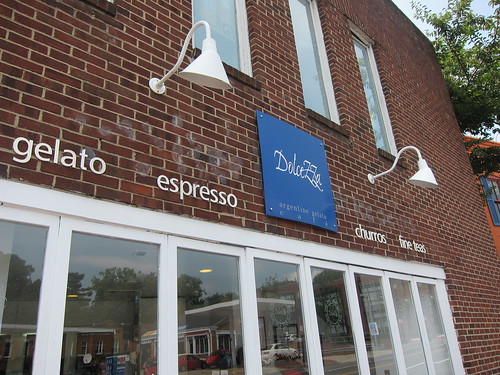 GM heard two restaurant related tidbits that he wants to pass on today:

First: Despite GM’s speculation that the new owners of the old Dolcezza building would seek a salon tenant, GM hears a restaurant is coming. A reader passed on a conversation she had with people working inside the building who told her it was being transformed into an Indian restaurant. GM would still prefer the old Dolcezza, but another Indian option in the neighborhood would be welcome. The space will likely pose a challenge for a sit-down restaurant, but maybe the kitchen will be in the basement?

This section of Wisconsin Ave. has really turned into a United Nations of different cuisine in recent years, with two French restaurants, a Mexican joint, a Korean restaurant, an Italian market, a Japanese noodle shop, two Vietnamese restaurants, and a taco/juice shop.

Second: Over a year ago, it was reported that Bethesda’s Fresh Baguette bakery was going to open in the space at the corner of S and Wisconsin (which most recently hosted the Sweet Frog frozen yogurt shop). After 13 months of little to no evidence of interior work, GM assumed the deal was off. But GM hears that the store is still in the works and expects to open in September.

One response to “A Couple More Restaurant Tidbits…”