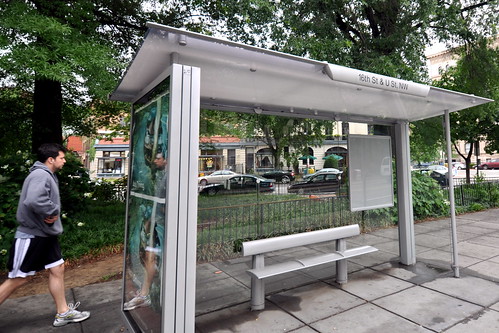 A former ANC commissioner is attempting to wage a war against the installation of a bus shelter in Georgetown. Grace Bateman, who served as Chair of the commission in the early 90s, is attempting to thwart the installation of a new bus shelter on 35th St., across from Dent Place. The stop–a popular stop for the students at the overwhelmingly African-American Duke Ellington High School a block away–serves three bus lines, including the D1, D2, and the D6. (Bateman has argued that the bus shelter at 35th St. and Reservoir should be enough, but that ignores the fact that the D6 doesn’t stop there). This is an wrongheaded campaign which sadly demonstrates the perverse arguments people too often make through the prism of historic preservation.

First alerted to the construction of the stop in February, Bateman wrote the ANC to object, claiming that when she was on the commission she obtained a promise from the city not to construct any bus shelters in Georgetown. This, she claimed, was because they “cause visual blight and impair accessibility on our already narrow sidewalks.” She warned darkly that allowing Metro one bus shelter could lead to many others throughout Georgetown.

Last week, Bateman upped her campaign by handing out these leaflets:

It’s important to spell out just how wrongheaded and disrespectful this campaign is. Bus shelters exist to give transit riders a roof on rainy or snowy days and shade on hot days. They give bus riders the basic dignity of not having to be exposed to the elements in order to access transportation. Asking bus riders–riders who are disproportionately less well off than the average Georgetowner–to be soaked by the rain, or burnt by the sun to maintain a view is to degrade the humanity of our fellow citizens.

It is true that Georgetown’s sidewalks can be narrow. And it is true that not all bus stops warrant a shelter. This is a decision DDOT makes for all of the thousands of bus stops throughout the city. But to be artificially restrained from considering a shelter in Georgetown based on some deluded sense of what it means to live in a historic district would be perverse.

We make concessions to modernity throughout Georgetown. And in no area are these concessions so broad and all-encompassing as the concessions we make to cars. Perhaps you haven’t noticed, but we allow people–residents and visitors alike–to store for lengthy periods of time massive, garish and decidedly modern vehicles on public property throughout Georgetown. If you want to talk about views out your front door, it would be virtually impossible to find a front door that does not open up to a view of dozens of modern cars. We could–if we really, really, actually cared about maintaining a Colonial Williamsburg-dedication to history–simply ban cars from parking on the street. That would go much further towards maintaining our historic “viewsheds” than blocking a bus shelter would.

But of course we won’t do that. We won’t because we don’t want to. And because we don’t really, really care that much about history to make that sacrifice. And that’s fine! We don’t live in Colonial Williamsburg! To selectively cling to the fiction that we do–especially when it comes at the cost to others less white and rich as most Georgetowners are–is offensive.

And beyond that, our idea of what “historic” Georgetown even is is remarkably off-base! Just look at old photos of Georgetown, and you will not see a neighborhood that would pass muster with those that complain today with bleats of “not consistent with the historic character of Georgetown”. The sidewalks were concrete. The streets were a mess. The streetlights were highway-grade. There were gas stations everywhere. Lower Georgetown was full of factories, lumber yards and hovels.

The actual–lower-case ‘h’–historic Georgetown was a place that bore some vague resemblance to that idea. But it’s in the same way that Main Street USA in Disneyland bears a passing resemblance to long gone and hollowed-out old downtowns that once dotted our nation. It’s a sanitized version, stripped clean of the grime and chaos that created it in the first place.

And the actual historic Georgetown was quite different from the idea of “Historic Georgetown” in another very salient way. It was way more African-American. And this is not a tangential difference.

African-Americans did not leave Georgetown by accident. They did not get together and simply decide to move out. They were priced out of Georgetown at exactly the same time the idea of Historic Georgetown arose. And that was the 1930s, when New Dealers moved to Georgetown attracted by its quaint, dated homes left behind as development moved elsewhere in the city.

Knowing that, it’s not a surprise that the definitive text on African Americans in Georgetown, Black Georgetown Remembered, expresses a rather jaundiced view of the Old Georgetown Act. It states plainly:

the Old Georgetown Act was a new final reason for the black exodus from a neighborhood that families had called theirs for generations. Many families simply could not afford to comply with new zoning restrictions and were forced out by renovation costs. Often black families had to close the boarding houses that provided both their incomes and cheap, affordable rentals for their black tenants as well. Such houses were now required to become single family dwellings. Moreover, the average price of houses all over Georgetown doubled between the 1930s and the 1950s. Consequently, as real estate assessments rose, taxes did also. The black population of Georgetown fell from nearly 30 percent of the general population in 1930 to less than nine percent by the 1960 census, and the racial diversity that had been so much a part of Georgetown’s historic character was virtually lost.

The idea of Historic Georgetown had no place for the African Americans. It placed architecture over humans. Order over disorder. Quaint “History” over genuine history. It is a bitter truth, for example, that the neighborhood salvaged a random stone house on M St. and turned it into a shrine to the idea of Historic Georgetown at the very time that the neighborhood was bleeding generations of black residents who carried with them the true social history of Georgetown.

Decide for yourself whether this was, or was not, the intent behind the creation of the idea of Historic Georgetown. But there’s no doubt that it was the outcome.

So keep that in mind when the idea of Historic Georgetown is wielded today. Particularly when it’s used not to save an old house from destruction but rather to enforce some vague dictate of quaintness on things that are obviously not historic. Like a glass-walled bus shelter. Historic preservation professionals know this and largely live by it. But that doesn’t stop it from being used as a blunt force club when the aesthetic preference of resident is offended.

The idea of Historic Georgetown is largely a fiction. And it’s mostly a harmless fiction, like when it’s used to attract tourists to a former slum. But when it gets used by those who simply don’t like something and want to use the power of the government to support their cause it becomes a problem.

Moreover, the idea has a tragic history of disproportionately burdening African Americans with the cost of maintaining its fiction. And it’s sadly consistent with that tragic history that the primary users of the 35th and Dent bus stop are African American students from Duke Ellington High School, some who surely descend from the exodus of Black Georgetown.

Bus stop shelters are no more an aberration to the historic district of Georgetown than is the fact that the neighborhood is 95% white. No one stands up at ANC meetings to object to the ahistoric demography of Georgetown, but propose a bus shelter to keep some riders dry and suddenly the bar is raised.

We should have bus shelters in Georgetown where it makes sense. We should not let a made up and sanitized history confuse us. The idea that decades went by when DDOT assented to this confusion is an embarrassment, not a precedent.

We do not preserve the history of Georgetown when we simply impose our own personal aesthetic preferences on others. But too often that’s what that the historic preservation process achieves. It’s rare that we are afforded such a stark example as this bus shelter offers. Let’s do right by the wet riders and reject this fiction.