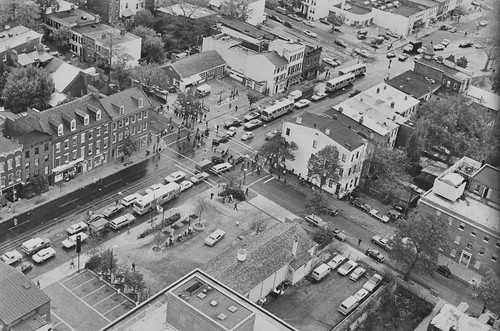 The former Valero gas station at the corner of Pennsylvania and M has shut down and will be torn down to make way for an apartment building. The Exxon at M just west of the Key Bridge is also marked for closure. The other Exxon in Georgetown–at Wisconsin and Q–has also been identified as a possible redevelopment site. There is a chance that within five years or so, there may be just a single gas station left in Georgetown. That might seem to be too few for you, but you’d be hard pressed to justify the number that there used to be.

The photo above shows the intersection of M St. and 30th in 1971 (during a citywide May Day protest that blocked streets everywhere). Aside from its documentation of the historic protest, this photo is also fascinating for showing how many gas stations used to be on M St. There’s one on the southwest corner (it was call Call Carl’s) and another on the northeast corner (that one was an Esso). Two more properties at the corner of 29th and M St. appear to be service stations as well.

(There was yet another gas station at Q and 27th in the early part of the 20th century, but it was gone a long time ago.)

GM believes there may have been at least one more gas station west of Wisconsin Ave., but he was unable to verify that.

So we may have gone from as high as eight stations down to one. GM will leave it to you to decide if that’s progress or not.

5 responses to “Georgetown Used to Have Way More Gas Stations”