Wit the completion of the newest mural in Georgetown, GM thought it would be nice to run through the other murals around the neighborhood.

The first is the aforementioned mural, the JFK/Ich Bin Ein Berliner mural on the side of the Berliner. It was painted this month by Rodrigo Pradel.

Probably the most hidden and yet beautiful murals in Georgetown, the mural on the side of 3510 O St. features a reproduction of the famous Japanese print the “Great Wave off Kanagawa“. The mural was commissioned by the couple who owned the house in the 1970s, Michael and Merete Gerli. The artist is listed on the mural as a “J. O’Connell”. 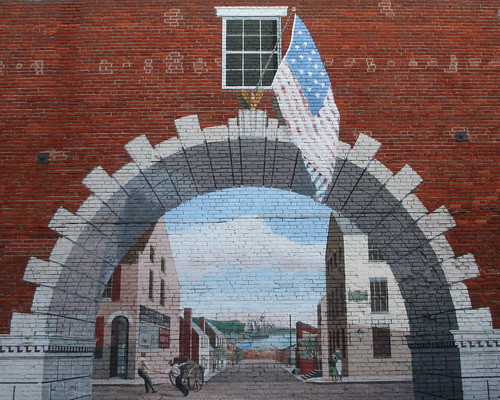 The next mural is on the side of America Eats Tavern at 3139 M St. GM does not know the history of this mural, but given the centrality of the flag would guess it was painted when Old Glory occupied the building, which is did from 1992 until last year. This mural doubles as a trompe l’oeil, depicting a 19th century scene of Georgetown through an arch.

The last one is also a trompe l’oiel. It is on the side of 3143 N St. It depicts several non-existent windows. The window on the left depicts a woman and a dog looking down to the right. This is a newer version of the mural and was painted in 2017. The older version looked similar, with just the woman looking out the window (but sporting some fetching sunglasses):

GM does not know when the original mural was painted. It is included in the Georgetown Panorama book, which is a collection of street views of Georgetown from 1977. So it’s at least that old.

Ironically, this building is now occupied by Eagle Bank, which was denied the permission to paint a mural on the side of its previous location (which is now the Sweet Green on Wisconsin below M).

Are there any other murals GM is missing?

2 responses to “Murals of Georgetown”