Dean and Deluca to Close 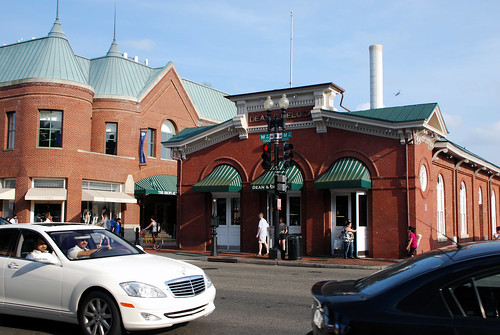 Photo by Beyond DC.

The Georgetown Dean and Deluca is closing August 1st. This should come as no surprise to anyone following the chain’s recent troubles. It has recently closed locations across the country. And the Georgetown location has been in a depressing state for a while now, with half empty shelves and out of season items filling the abundant gaps. This will be a loss for the neighborhood.

GM would write a retrospective, but frankly he didn’t shop there that much, and the Washington Post’s Maura Judkis already wrote a fabulous one:

I remember walking through the Georgetown market, in its historic brick building, and looking at all the cheeses and smoked fish and exciting ingredients — not that I even knew what to do with half of them, at the time. I remember marveling: This is where fancy people buy their groceries. I think I bought one of the prepared salads, displayed behind glass in ceramic bowls. For less than $20, Dean & DeLuca made me feel like I could be a fancy person, too.

What GM can do is give you a little context about the building’s possible future.

The market building itself was built in 1865. There had been a market building at that location dating to as early as 1795. Throughout this period, the property was owned by the city of Georgetown. In fact, it’s still publicly owned. When Georgetown was subsumed into the District of Columbia in 1871, the ownership of the market passed to the District. And to this day the property is owned by DC.

But DC doesn’t manage the property. It leased the property to Herb Miller’s Western Development in 1979. The developer hosted a market in the building, but claimed to struggle greatly due to a lack of foot traffic. Western’s moaning led to several dramatic lease extensions, as described by the Post in 1986:

Based on the amount it spent renovating the market, Western would be able to rent it to merchants and operate the place rent-free for 32 years, until 2016, the report said.

In retrospect, Ned Walsh, property administrator for the city’s Department of Administrative Services, said it is “amazing” how bad the lease was for the city. Walsh noted the “embarrassingly lengthy” amount of time before the city was to get any rent.

But critics said the biggest break for Western came in 1981, when the city granted Western’s request to extend the lease from 24 years to 102 years. Western said it needed the extension to justify its spending several million dollars to build a walkway around the building and make other improvements. But Troupe’s office said that while the lease extension was “beneficial to the lessee,” it was “not in the best interest of the District.”

Even with this sweetheart deal, the market continued to struggle, so Western Development shut down the market in 1984 and transferred the lease to another party in 1985. The building still sat empty for another seven years before Dean and Deluca opened in 1992.

The one good piece of news is that there’s actually a law that says this building has to be operated as a market. So hopefully a good replacement can be found. It probably won’t have quite the high-bougie fare of vintage Dean and Deluca, but there are good examples around DC of possible models. For instance, the multiple-vendor model of Union Market could attract similar crowds. Of course, the classic Eastern Market also still chugs along with a similar model. But neither of those have quite the abundance of what Dean and Deluca once offered.

Either way, it’s a fantastic opportunity for the right tenant. The building is full of ancient and recent history, hopefully the next occupant will continue on the history.

3 responses to “Dean and Deluca to Close”