Make Your Own Treasure Map

If you’re a parent of a young child and looking for an idea to entertain them while also getting them out of the house, consider modifying an idea GM tried over the weekend: make your own treasure map.

Here’s what GM did. You can take some or all of the ideas for your quest. First he decided where the treasure would be. Then came up with a final hint that would lead there. The final hint was converted into a series of numbers using a basic cypher key (a=1, b=2, c=3, etc.). Then GM came up with clues that would guide his daughter towards filling in the numbers by guiding her to addresses around the neighborhood. Then she could decode it back into words and get the final hint.

The first clue was “Go to where our neighborhood is written in lights”, i.e. the Georgetown theater: 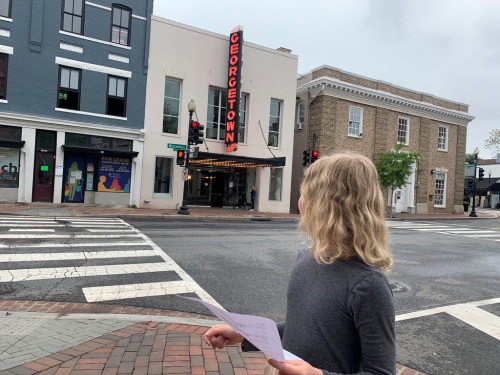 (She didn’t quite figure this one out right away, so GM suggested they walk down Wisconsin Ave. and see if they found it. It was all a bit like Easter, since GM was pretending that the map was delivered by a mysterious figure and that he had no idea where it came from or where the clues led. Of course she is way too old to believe this, but it made it a bit more fun.)

From here the map said to walk a block west and then walk north until you see a flag and a ring of roses. (Thus the adventure doubles as a wayfinding lesson!)

The next clue was to walk a block north and look for a horse: 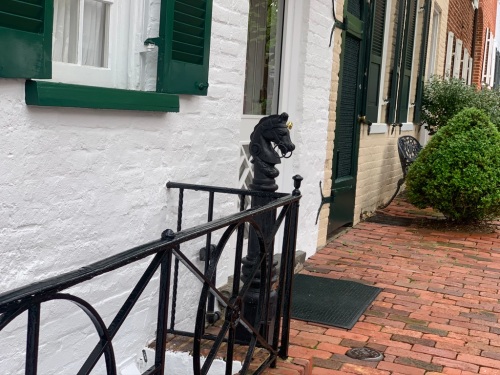 The next clue was to walk north and count the moons. 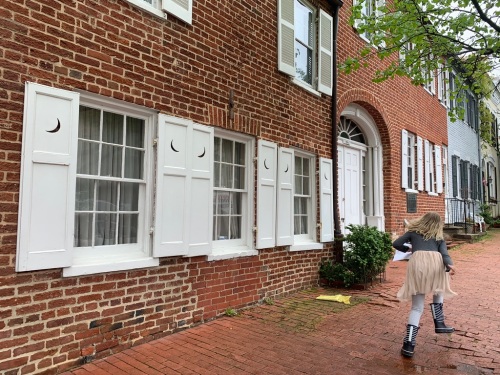 The map then said to subtract two and plug it in. So ten moon shutters became eight, thus the next letter was H. And that made the first word “North”.

The next clue was to go to Pineapple Place. GM’s daughter is familiar with the book “The People of Pineapple Place“, which was inspired by Pomander Walk, and knew just where to go.

Once there the clue said to look for a pink then a blue house, and plug their addresses in:

The next clue sent her a few blocks away looking for an address written in letters: 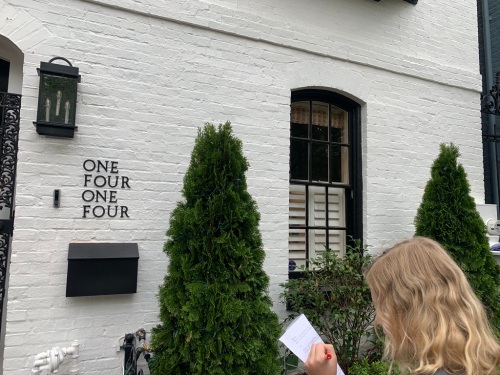 The final clue was perhaps the most boring. It just had her walk up a block and look for a blue house. It was the best GM could come up with:

A look to the cypher produced the final hint:

GM was sure she would immediately figure this out since she’s been biking over on GU’s campus a lot recently. But she didn’t. She did think it possible that GU would have some cannons, and GM encouraged she explore that. Once she got to the campus, she remembered and headed over. 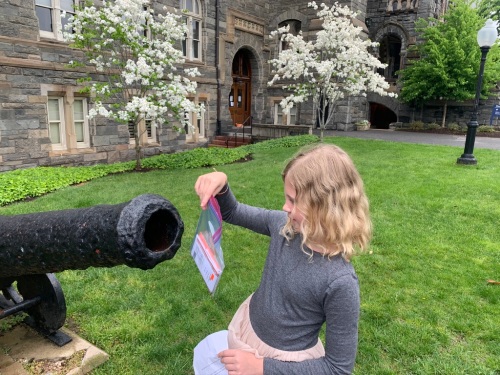 Before the hunt, GM (or rather the “mysterious figure”) had put a couple chocolate bars in a bag and put it in the cannon on the right (i.e., the northern one). He put a couple magnolia seeds in to cover it up and crossed his fingers that nobody would find it before his daughter (which didn’t seem like a particularly likely event these days).

Anyway, between planning it and executing it, it was a fun couple hours. If you’re struggling to come up with ideas, consider this one. You can tailor the difficulty to the child’s age. Even a teenager could be entertained by this.

Our neighborhood is perfect for it. There are some many ways that the advantages of living in Georgetown have temporarily evaporated. It’s good to take advantage where they haven’t.