Get Your House’s Baby Pictures (In a Way)

Last week, GM took a deep dive into a random real estate new article from 1902. In charting out the physical reality described in the article, he relied on a couple very old, very detailed maps. GM thought it would be interesting for readers to learn exactly where those came from and how they might check them out for themselves. It can even help you find the first “picture” of your house.

The maps are insurance maps. They were drawn up to give fire insurance companies an accurate picture of what risk any particular building might face. As a result they depict each structure’s footprint in enormous detail, including the building’s materials (i.e. wood versus brick). Plus, they’re just really lovely maps.

Several different companies prepared the maps for DC, including most notably G. M Hopkins and the Sanborn Map Company. Digital versions of some of the annual collections of maps are available online.

For the earliest collection GM can find, go to the DC Public Library’s online Washingtonia Collection. They have five different editions of the G.M. Hopkins maps, with the earliest from 1887.

The way they typically work is that the first page has a key to to whole city showing with plate each part of the city will appear:

You then can navigate to that plate to see the detailed map. For instance for the 1887 map (above) lower east Georgetown appeared on Plate 38:

(As with this plate, often they appear with north facing right, instead of up.)

The Hopkins maps are interesting both because they are the oldest and because they have a great deal of information about the property owners:

DCPL has Hopkins maps from 1887 up to 1896. For slightly more recent maps, you’ll need to refer to the Sanborn maps, which are best available through the Library of Congress. They have maps from 1888 to 1916.

And the Sanborn maps offer a different level of detail from the Hopkins maps. They have less information on the land owners, but more on the commercial establishments. Like here is M St. from 1903: 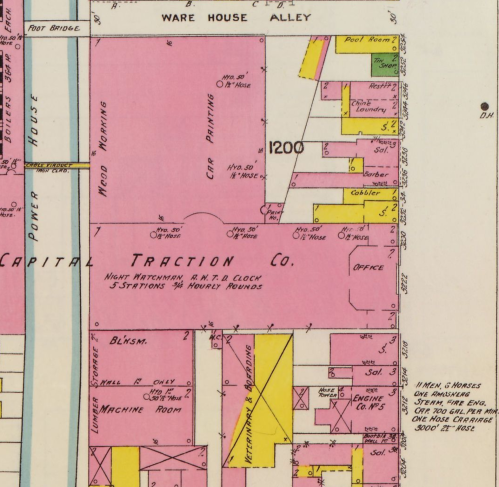 Notice the extra detail on the capability of the Engine Co. No. 3 firehouse. That’s information a fire insurance company would definitely want to know.

You can really get completely lost in the detail of these old maps. Like look at how this block had a pool room, a tin shop, a Chinese laundry, a saloon, a barber and a cobbler. What a snapshot!

But back to the house baby pictures! These maps can help you date your house. For instance, GM knows that the building permit that was obtained to build his house was issued in 1895. But an 1898 map doesn’t show his house having been built yet. The 1903 map, however, does have it. So GM can be reasonably certain his house was built between those years. (He prefers to believe it was built before 1900 just because it’s more fun to think of it being a 19th century home than a 20th.)

You can poke around the databases for yourself. See your house as a baby!