This week on Lost Georgetown, GM is visiting the former home of one of the most successful authors of the 19th century: E.D.E.N. Southworth.

Unlike other successful authors of her time, like Mark Twain or her friend Harriet Beecher Stowe, Southworth’s name has not persisted in the public awareness. (And speaking of names, E.D.E.N. stands for her three personal names and her maiden name: Emma Dorothy Eliza Nevitte). But during her life she was one of the highest paid authors, writing more than 60 novels. 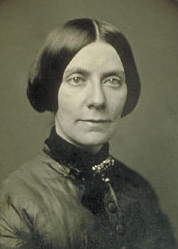 From around the 1850s until her death in 1899, Southworth lived primarily in a cottage on Prospect St. that was dubbed Prospect Cottage. The Streets of Washington has an excellent write-up of Southworth and the house here).

The house was located directly next where the Exorcist steps are now. In fact, the house stood exactly where the home that was the scene of the exorcism now stands.

The home was built in the carpenter gothic style, which was popular across the country before the Civil War (although if it was popular in Georgetown, no other examples survived).

The house survived the construction of Union Station next door (the current Car Barn), despite the dramatic construction that brought:

The Exorcist steps themselves were already there by the time Southworth died in the cottage in 1899. The current stone steps were constructed with Union Station in 1895. But wooden steps from Prospect down to M St. existed for years before that. From an article in 1895:

The long heavy steps that for years have led from Prospect Street past the Prospect cottage and down to M Street and the northern end of The Aqueduct Bridge have been removed permanently to make room for Washington and Georgetown railroad excavations, people in this vicinity are very desirous of having these steps while yet intact removed to the foot of 37th Street in order to give convenient entrance to M Street.

After Southworth’s death, the house became an ice cream parlor. From an article in 1905:

Now the sitting-room that Mrs. Southworth planned is an ice cream parlor, and the handsome, old drawing-room serves as a cafe. On the verandas visitors sit and chat as they wait for the cars. Their talk is of Mrs. Southworth, and it is claimed that they cut great splinters out of the porch and side of the house, and even capture the bugs and grasshoppers in the yard for souvenirs….

The house was purchased by the National League of Pen Women in 1928, with plans to turn it into a museum to Southworth. But those plans never came to be, and the home was demolished in 1942. The modern day home (the Exorcist house) was built in 1950.

Fun fact: the side yard of the modern home used to be the extension of 36th St. but was closed off. As far as GM can tell, the street closure was never actually authorized by the city, and it remains public land.