Transformers Highlight the Absurdities at the Heart of Historical Preservation

Last week, the Old Georgetown Board indicated that they would reject the application of Newton Howard to keep the two gigantic Transformers sculptures he installed in front of his house on Prospect St. in January. This decision should really come as no surprise to anyone familiar with the OGB. But the decision nonetheless highlights some absurdities at the heart of historic preservation in Georgetown.

First of all, to fans of the sculptures, the end is not imminent. Howard has sworn to keep fighting. And the decision is not even technically final yet. Even after the OGB issues its formal decision, it is really just a recommendation for its parent body, the U.S. Commission of Fine Arts. The CFA normally just rubber-stamps the OGB, but not always. And in either event, the decisions take time. (So, so, much time.) We’re still probably at least a month from the CFA issuing its decision. And even that is just an advisory decision. DC itself is really the only body with the actual authority. It complies with the CFA generally, but a homeowner can appeal the CFA’s decision to DC. And when that happens, the Mayor’s Agent holds a hearing and issues the final decision. (And even that can be appealed in court).

But in all likelihood, these bodies will decide against the sculptures. Because, come on, look at them! It’s obvious they can’t stay in a historic district.

But let’s explore that a little bit.

The Citizens Association weighed in against the sculptures, and laid out the case against them:

Prospect Street like many residential streets is characterized by attached houses built to the property line abutting public space. While planters are normally found in this zone, monumentally scaled sculptures are not. There is also no historic precedent for displaying sculptures on public space abutting the primary facade.

END_OF_DOCUMENT_TOKEN_TO_BE_REPLACED

Weigh In on the Proposed Liquor License Changes

The BID is organizing community meetings starting next week to hear from the public about these proposals. Here is a link to a webpage created by the BID on the effort.

END_OF_DOCUMENT_TOKEN_TO_BE_REPLACED

Towne Liquors is planning a move up the street. The liquor store is currently located at 1326 Wisconsin Ave. has applied with the ABC Board to move its license to a new location: 1438 Wisconsin Ave.:

END_OF_DOCUMENT_TOKEN_TO_BE_REPLACED

Left for dead, the proposal to link Georgetown with Rosslyn via an aerial gondola has roared back to life. As first reported by DC Urban Turf, Councilmember Brooke Pinto has submitted a budget request for $14 million related to the project.

A small part ($2 million) of the money being request by Pinto would go towards to purchase of the land where the former Key Bridge Exxon was. The stated reason for this acquisition is to convert it to the city’s first electric vehicle charging facility, to be used by taxi/car sharing drivers and other commercial vehicles. The rest would go toward funding a full environmental impact study of the gondola. If it concludes that the project makes sense, the property could be used to serve as the Georgetown terminus. END_OF_DOCUMENT_TOKEN_TO_BE_REPLACED 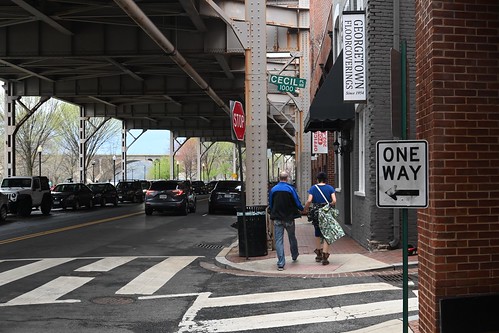