ANC Round Up: Short Edition

The ANC met for the final time in 2011 on Monday night (sorry for the delay in the report, but yesterday GM wanted to pump the CAG meeting). The agenda was short and the proceedings efficient, so there’s really not much to report, but here goes.

The biggest item on the agenda was the issue of Glover Park’s planned streetscape improvements. Part of those improvements call for lane reconfiguration, which frightens a lot of people. The fear is that by limiting lanes on Wisconsin Ave., the drivers will take the side streets instead.

As GM reported on Monday, the ANC is concerned about this. Glover Park, however, didn’t take too kindly to the possibility that ANC2E might derail the project. So Chair of the Glover Park ANC, Brian Cohen, showed up at the Georgetown ANC meeting to testify in favor of the changes and to argue that it would not negatively affect Georgetown (DDOT representatives were also at hand to make the same case, but the bureaucratese they used didn’t do a great job selling the project).

In the end the ANC (the Georgetown one, that is) passed a motion simply asking DDOT to keep in mind the possible effects this project could have on Georgetown and to include Georgetown in the discussions going forward. For the record, GM predicted Monday that Commissioner Bill Starrells wanted to “derail” the project; in fairness GM must report that Starrells since assured GM that he never intended to try to stop the project, and just wanted to air his concerns about the project. END_OF_DOCUMENT_TOKEN_TO_BE_REPLACED

Today for Not So Long Ago, GM stops by the west end of M St. between 33rd St. and Bank St. Today this block hosts the fashionable Cady’s Alley shopping district. It’s one the the nicest additions to Georgetown in over twenty years. That’s why it’s so hard to imagine that block as a run down collection of inexpensive restaurants, which it was in 1993.

The banner advertises it being 18 years old, which would mean it opened around 1975. Anthony Lanier started buying up Cady’s Alley in the mid-90s, so this restaurant probably wasn’t open much longer.

To the left of the Indian restaurant was a TCBY. Interestingly, there’s a small Metro map in the window. It’s crazy to GM to think that the rail system was only 17 years old at the time this photo was taken. The photo itself is 18 years old.

To the right is Zed’s Ethiopian Cuisine, which is now located on M and 28th (and looks a lot fancier than it did back then).

There’s another Madurai sign above Zed’s, which suggests that the restaurant was on the second floor of that building too. END_OF_DOCUMENT_TOKEN_TO_BE_REPLACED 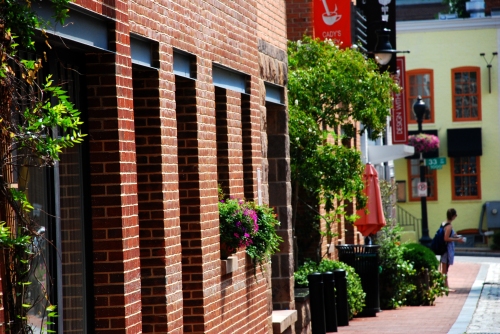 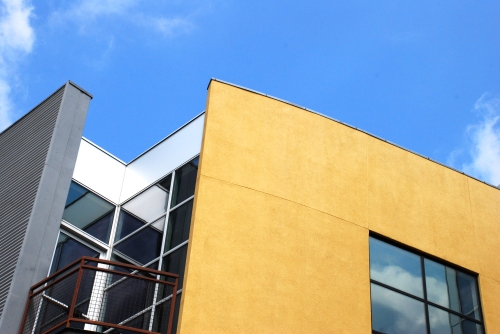 Could Georgetown Handle Some More Modernism?

GM is no big fan of modern architecture. He thinks it has its place, but in a walkable urban community it often creates a dismal void. And for Georgetown in particular it presents a distinct problem: Georgetown’s primary competitive advantage over other retail districts is its sense of historical place. If it were to lose the appearance of a 19th century village it would become Clarendon without the Metro access.

But should it be a total prohibition? Can Georgetown incorporate more modernism into its built environment without losing its primary competitive advantage? GM thinks it can. And there’s a great example already here in Georgetown of how Modernism can be incorporated into Victorian architecture without overpowering the sense of historical place: Cady’s Alley. END_OF_DOCUMENT_TOKEN_TO_BE_REPLACED