WMATA Tries Out Bus Only Lanes For Obama Day

The Washington Post is reporting that there will be bus-only lanes through Georgetown from Wisconsin Ave. to Washington Circle in Foggy Bottom on Inauguration Day. They write:

Although widespread bridge and street closures will restrict personal vehicle access, Metrobuses will be allowed to use both and will use special bus-only lanes through Georgetown from Wisconsin Avenue to Washington Circle (23rd Street and Pennsylvania Avenue), for example, bypassing regular traffic.

It’s a little unfortunate that the Washington Post feels the need to explain to its readers where Washington Circle is. But that aside, what they don’t do is say what road will have the bus-only lane. It could be either M St. or K St. Which is it? Find out that and how you might want to get used to the lane for the future, after the jump:

It appears from the inaugural bus corridors map that the bus line in question is the normal 31 bus rather than some ad hoc K St. line. Thus it is M St. and then Pennsylvania Ave. that will have one lane closed to personal cars. A bus-only lane on K St. to Washington Circle would probably be less disruptive. But then again, one bus lane will be just a rain drop to the rest of the street closure tempest that day. Unless you have some dire medically required need to drive that day, you’d be nuts getting behind a wheel.

So why might you want to get used to these lanes? Well, last year DDOT conducted a comprehensive study of Georgetown’s transportation issues. In their final report, the consultants recommended the creation of a bus-only lane on M St. and Wisconsin. See the plans below: 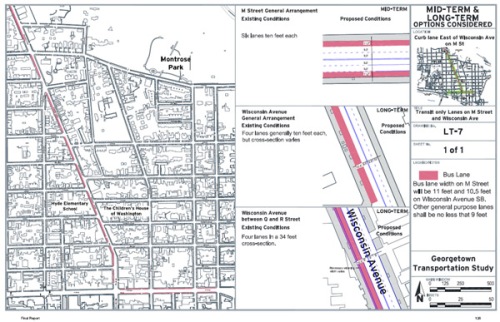 This recommendation was in the “Long Term” category, so don’t expect bus-only lanes within the next five years or so. Eventually though, DDOT may install something along those lines.

GM definitely supports the idea of bus-only lanes. It will speed the 30s and Circulator through Georgetown, and will encourage more Georgetowners and people visiting Georgetown to leave their car at home. Plus, we may eventually get a streetcar on this route. If we had a streetcar with its own lane going through Georgetown, that would cut down significantly on the demand of people to drive here, which would benefit everyone.