In one of his earliest posts, GM documented all the stores in Georgetown that are on M St., Wisconsin Ave., or just off these two corridors. The study was inspired by an article by the great Marc Fisher lamenting the “generification” of Georgetown.

(While as discussed below, there were openings in 2009, not all the disparity between 2010’s totals and 2009’s totals can be explained by new establishments. GM was simply a bit more diligent about tallying them all this year.)

For the visually minded, here’s what Georgetown looks like in pie form: 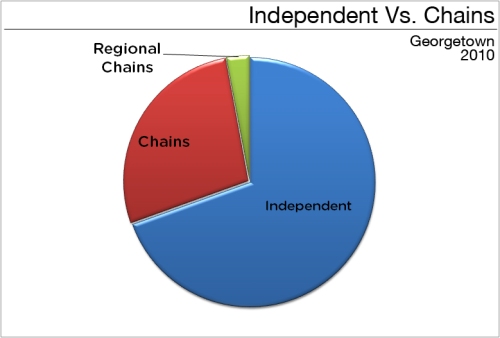 (Now GM will take another moment to explain that this is a survey of the number of establishments. It is not an analysis of square footage. Thus one Barnes and Noble equals one Bartleby Books. It’s not perfect, but you can make arguments either way as to what matters more, the variety of individual stores or the variety of overall square footage. It’s a moot point, either way, since GM has no way to measure square footage with any semblance of accuracy.)

So what is the variety of offerings in Georgetown? As it was last year, Georgetown is still (unsurprisingly) dominated by restaurants and clothing stores:

While some lament the dominance of clothing stores and restaurants, the fact remains that nearly half of all individual retail spaces in Georgetown are occupied by establishments offering something other than clothing and food. You can find just about anything you want in Georgetown, you just have to look hard enough to find it.

Who Opened and Who Closed:

However, this number is a bit misleading. A lot of the closings were concentrated in the Georgetown Mall. Specifically, 20 establishments closed in the mall this year. That represents about 23% of the establishments that were open in the mall at the beginning of 2009.

While independents took a bigger hit in pure numbers than chains did (35 independents vs. 12 chains), the percentages line up almost exactly the same. Of the chains open at the beginning of 2009, 9.3% closed; of the independents, 10.5% closed.

That observation remains true. As of 2010 Wisconsin Ave. is 75% independent while M St. is only 64% independent.

While GM has thrown just about every possible stat at you over the preceding paragraphs, none is quite so salient as the very first one: 443. There are four hundred as forty-three stores and restaurants in Georgetown. That is a remarkable number. Particularly so when you consider that almost 70% of those establishments exist only in Georgetown.

While we must always be on guard against the threat of “generification” the fact remains that the state of Georgetown is strong.

Filed under Stores of Georgetown, Uncategorized