Another Landmark Calls it Quits 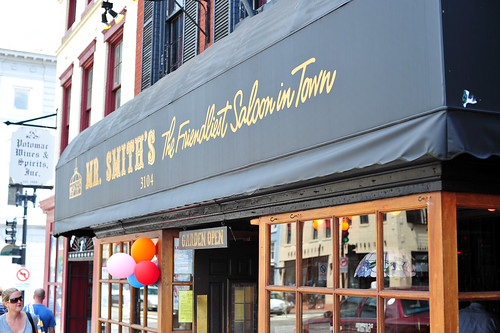 The Washington City Paper reported the sad news yesterday that Mr. Smith’s is closing down at the end of the month. This will toll the end of yet another landmark establishment in Georgetown. By GM’s count, it may be the second oldest tavern in the neighborhood.

GM looked into this two years ago when another mainstay, the Guards, closed. While Martin’s is clearly the longest lasting restaurant in Georgetown (if not DC) the question of who’s second is muddled. 1789 and Tombs were opened in 1962. But Mr. Smith’s also appears to have opened circa 1962 (GM couldn’t pin down the exact date). So it could be the second oldest continuously operated restaurant.

Surely many have fond memories of the place. And it should be mentioned that the owner hopes to open somewhere else in Georgetown (they’re supposedly only closing because the landlord jacked up the rent). But those sort of promises never seem to pan out.

So it’s time to say goodbye to another old friend. One that joins the recently and dearly departed like Garrett’s, the Guards, Nathan’s, and Furin’s. There were probably more fancy restaurants out there, but none friendlier.

2 responses to “Another Landmark Calls it Quits”