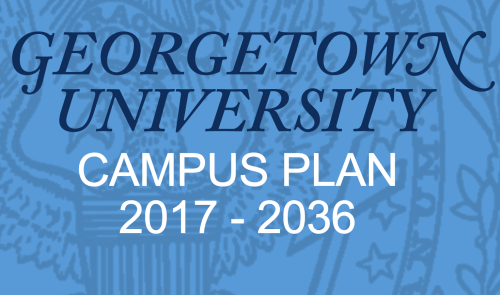 Yesterday, Georgetown University released a draft for their next campus plan. For those that have been around the neighborhood more than a couple year, they likely remember the contentious last campus plan that ended up with a happy ending. This plan is off to a much better start, and is likely to not face nearly the same conflict before approval. Much of that is due to the success of the last plan, although Georgetown’s relatively modest proposals will likely also contribute to a smooth approval.

The last time Georgetown went through this was much worse. It was ugly, with nasty comments coming from both the permanent residents and the campus. The university refused to buckle to the neighbors’ and ANC’s demands, and pushed the fight to the Zoning Commission. After fighting it out at the Zoning Commission, and somewhat beyond, the school and neighbors reached a settlement (two years into the ten years that the plan was supposed to cover).

Key to the settlement was the creation of the Georgetown Community Partnership. It’s a steering committee, with a series of working groups covering a range of relevant topics like safety and student life, or transportation and parking. The committees are made up of school administrators, students, and representatives of the ANCs and the citizens groups. (Disclosure: GM represents the Citizens Association of Georgetown on the Transportation and Parking working group.)

The committees work well. By bringing the neighbors into the discussion, they can feel that their voice is being heard, while at the same time learning more directly from the school about challenges they face in accomplishing various shared goals.

Not surprisingly, the GCP is at the heart of the new draft plan. They will continue to serve the same role they have under the current plan. One of the additional key roles of the committees is to monitor the school as it meets certain required steps in the campus plan. For instance, in the transportation and parking working group that GM is a part of, that mostly means working with the school to craft a survey of its community to determine what transportation choices they are making and how they may be altered.

What is somewhat surprising (although it was a stated goal of the last plan) is that the new plan is not for just ten years but twenty. This would be a huge step, and it would enable the school to make serious long term plans. And it would be a giant sign of trust between the school and its neighbors. Remembering back where we were the last time the school was putting out draft plans, GM is elated that we are where we are.

Some interesting specifics from the draft:

There’s more in the plan. Check it out.