GM would like to do with CAG Board member-duty to invite you to come on out to CAG’s annual gala. It is October 18th and it’s located at the Italian embassy on Whitehaven (just off Mass. Ave.).

It will be a masked ball with a Venetian Carnivale theme. There will be oodles of exotic prizes available for the auction, including trips to fancy European locales.

GM hopes to see you there!

You Could Win Big at the CAG Gala

The Citizens Association of Georgetown is holding its annual gala October 26th. Once again it will be held in the glitz Russian Embassy up in Glover Park. This year, though, the organizers are offering something special.

When you enter, you will be given a pile of chips to bet on various card games. You will then be able to take the winnings and bid in an auction for a bunch of really nice prizes. They include week long rentals at locations including a 18th century French chateau, a two bedroom Florence apartment, and a spa at Rancho La Puerta in Mexico. END_OF_DOCUMENT_TOKEN_TO_BE_REPLACED

What’s ailing Wisconsin Ave.? Despite being in one of the most popular retail districts in the country, the strip is littered with vacancies and discount clothing stores? What gives? How did it get this way? And what can be done by the city, the BID, and the citizens to turn it around? And why aren’t there more stores that serve residents, like a hardware store?

Well tonight these questions, and more, will be on the agenda of the Citizens Association of Georgetown’s November membership meeting. On hand to discuss these matters will be Ward 2 Councilmember Jack Evans, Chairman of Western Development, Herb Miller, and President of Asadoorian Commercial brokerage, John Asadoorian. Each of these men play a big role in what Georgetown looks like today, and will likely play a big role in what it looks like in ten years and beyond. Evans is about to be reelected, Miller’s Western Development is still a big player in the Georgetown development scene, and Asadoorian is active throughout the neighborhood getting businesses and landlords together.

GM himself will be moderator, but he’ll keep his role to just tossing out the questions to the panel and getting out of the way. END_OF_DOCUMENT_TOKEN_TO_BE_REPLACED 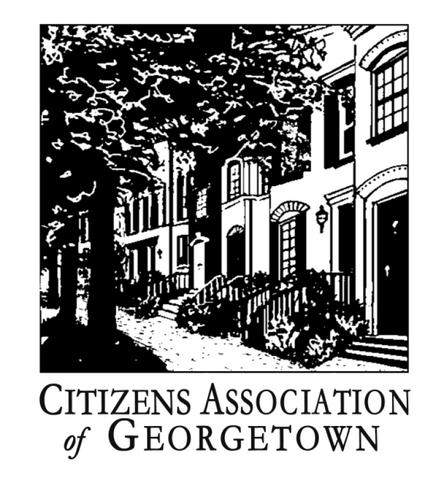 Tonight, CAG is holding its March meeting at Boffi in Cady’s Alley. There will be presentations and tastings by Al Nappo (Farmers and Fishers), Tom Crenshaw (Paolo’s), Mike Cherner (Mei N Yu), Chef Kahn (Mate), and Sal Ferro (Clyde’s). It should be one of the better CAG meetings of the year.

GM’s only wish is that Nappo brings along his bartender. They make some absolutely fantastic (and fantastically inebriating) cocktails.

For several years, the Citizens Association of Georgetown has run a public safety program that supplements MPD’s normal coverage. It does this by hiring Securitas to patrol the neighborhood and by paying for a reimbursable detail from MPD (where normal MPD officers are paid overtime to work extra hours).

This doesn’t come cheap though. To maintain this program, CAG needs to solicit donations every year. Right now they’re in the middle of one of their fundraisers. So give what you can to support this worthwhile program.

The Fight That Wasn’t

Last night, the Citizens Association of Georgetown hosted a debate between the Office of Planning’s Travis Parker and the Committee of 100’s Nancy MacWood over the proposed zoning code rewrite. While GM billed the affair as a potential fight between two rival ideologies, what actually took place was a very respectful, high-minded, and detailed discussion. The event performed a great service for the neighborhood, even if it didn’t provide the fireworks that GM was expecting.

Up first for the evening was Travis Parker. He had the task of explaining what this was all about in the first place and what his office was setting out to do:

As explained by Parker, zoning represents the rules and regulations that govern building form and building use. They concern, for instance, what the height of a building is or how large its massing can be. They also determine what you can do with the building, such as open a shop or build a home. They don’t, however, govern design review, construction standards, or specific commercial guidelines (like whether you can have a take-out restaurant or just a sit-down one).

DC’s zoning code was last rewritten in 1958. Since then, a host of exceptions, overlays, and planned-unit developments have turned the code inside-out. The code is now complex and unreadable by anyone but a land-use lawyer. So the first objective for the change, according to Parker, is to make the code simpler and easier to understand. END_OF_DOCUMENT_TOKEN_TO_BE_REPLACED

As mentioned here last week, tonight the Citizens Association of Georgetown is hosting a meeting to discuss the ongoing zoning rewrite. The meeting will be structured like a debate, with the Office of Planning’s Travis Parker presenting the case for the changes, and Nancy MacWood will present the case against the changes, or at least some of the more controversial topics.

The tenor of the debate could be affected somewhat by the recent hubbub over whether or not Mayor-elect Vincent Gray should keep on the Director of the Office of Planning, Harriet Tregoning. What initiated this recent scuffle is that the Committee of 100 wrote a letter to Gray asking that he not keep Tregoning or DDOT director Gabe Klein. END_OF_DOCUMENT_TOKEN_TO_BE_REPLACED

For several years, the Citizens Association of Georgetown has run a public safety program that supplements MPD’s normal coverage. It does this by hiring Securitas to patrol the neighborhood and by paying for a reimbursable detail from MPD (where normal MPD officers are paid overtime to work extra hours).

This doesn’t come cheap though. To maintain this program, CAG needs to solicit donations every year. Right now they’re in the middle of one of their fundraisers. So give what you can to support this worthwhile program. 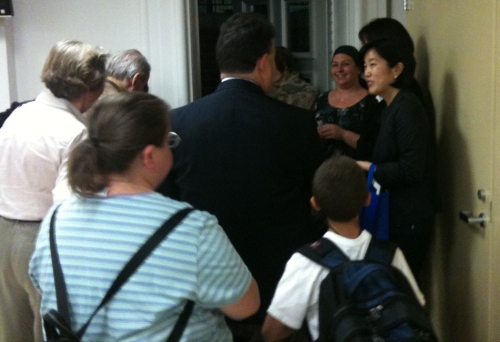 Last night Chancellor of the D.C. Public Schools Michelle Rhee spoke to the Citizens Association of Georgetown at the Hyde-Addison School. Rhee spoke for about an hour to the packed crowd of mostly supportive listeners.

Before the meeting, however, a set of impressive student ambassadors gave members of the audience personal tours of the Hyde and Addison buildings. GM was particularly impressed with the poise and enthusiasm of his three ambassadors.

Now to the meeting: Rhee started it off with a quick introductory speech. She thanked Hyde principal Dana Nerenberg and congratulated her on being one of DCPS’s exemplary principals. Specifically she cited two of Nerenberg’s accomplishments.

First, Rhee mentioned that Nerenberg had developed a program to improve special education by offering Hyde as a location for more “inclusion kids”. To accommodate the addition children, Nerenberg worked with school building czar Alan Lew to completely renovate the empty Addison school. The school took over the Addison school last spring. Now kindergarten through first grade are in Hyde, while second through fifth grade are in the gleaming Addison building.

Second Rhee mentioned Nerenberg’s work with the principals of Mann and Janney.  Together they developed a collaborative program for their three schools to help spread their success to six less highly achieving schools. The program enables the struggling schools to learn best practices from the higher achieving schools.

After speaking about Nerenberg, Rhee stated that we are nowhere near being able to say we can provide a good education to all the kids in the school district. But despite telling a journalist last year that she would give herself a failing grade, Rhee stated that there are nonetheless hopeful signs of progress. Specifically she mentioned that the improvements that the fourth graders made in math last year put the District in first place versus all the fifty states in terms year-over-year improvements.

Adorably, shortly after Rhee made this claim a student ambassador raised his hands and wanted to clarify that it was in fact his class-year that had increased its performance so well. The crowd got a kick out of that. END_OF_DOCUMENT_TOKEN_TO_BE_REPLACED

Last night, the Citizens Association of Georgetown held its September meeting at the Thomas Moser store on M St. Georgetowner and real estate magnate Anthony Lanier held court for the entirety of the meeting dispensing his wisdom and world view to the packed furniture show room.

A native of Vienna (Austria, not Virginia), Lanier arrived to Georgetown in the 80’s. He founded East Banc in 1987, and has since then gradually brought the best of European urbanism to our village through fantastic projects like Cady’s Alley.

Last night, Lanier spoke off-the-cuff for over an hour discussing his projects, both past and future, and the challenges we face making Georgetown even better. It was a fascinating window into the business of real estate and the thinking of a man who’s been called more than once the “Mayor of Georgetown”.