The Plans For the Jelleff Sports Fields 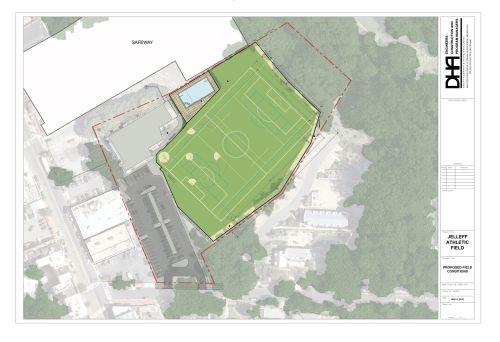 As discussed at length here at the Georgetown Metropolitan, over the winter the District entered into an agreement with the private Maret School for the school to renovate the dilapidated Jelleff sports fields in exchange for an easement granting the school exclusive rights to use the field during prime hours for a decade. Today, the Old Georgetown Board will be considering several design elements of the plan, including the proposed lighting and the fences.

GM expressed strong misgivings about the manner in which the District Department of Parks and Recreation entered into an agreement with Maret. It appeared to be, essentially, a sole source contract without a genuine public request for proposal and GM argued that the deal should be scrapped and reopened for bids. The ANC agreed.

While GM still is disappointed in all the parties involved in the crafting of this agreement, it’s a done deal and, frankly, it’s time to move on. The sooner the field is built, the sooner children can benefits from it and the new pool (and, not for nothing, the sooner Maret’s ten year easement extinguishes). In the meantime, GM is pleased to report that since the confrontational ANC meeting, Maret has reportedly been a good partner with the neighbors and the primary stakeholders in the field, including Stoddert Soccer, Hardy Middle School and the British School. And in defense of Maret, GM should say that he learned that while the agreement was being formed Maret reached out to CAG to include them but was essentially ignored. (If only it had somehow related to drunk Georgetown students maybe CAG could have been bothered to care). END_OF_DOCUMENT_TOKEN_TO_BE_REPLACED

ANC Round Up: The Great Jelleff Battle of 2010 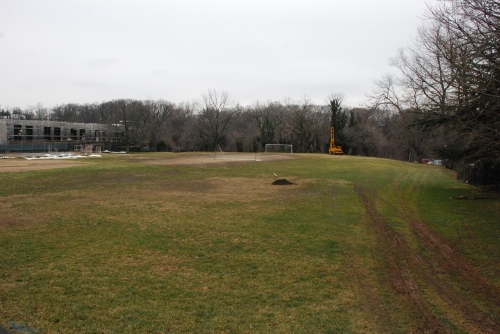 Passions ran high last night at the February ANC meeting as the commission addressed the deal between the city and the Maret School concerning the Jelleff fields. Constituencies from across the board were represented by speakers throughout the entire two hours spent talking about it. Huge kudos go to Chairman Ron Lewis for managing the contentious and difficult discussion. While it was the most dramatic ANC meeting GM has ever attended, the tenor of the discussions was civil and (for the most part) orderly.

Here’s an audio recording of the Jelleff discussion:

The Case for the Deal

The discussion started off with a brief statement from acting Director of Parks and Recreation, Jesús Aguirre. Aguirre began describing how great it was that the city purchased the land from the Boys and Girls club. He then casually transitioned into a discussion of the deal with Maret. But cutting to the chase: Aguirre has only been acting Director for two months. He had little to do with this process and, frankly, added little to the proceedings last night other than to acknowledge that the process was not ideal.

Last month the Old Georgetown Board did not meet. This had the fortunate by-product of making January’s ANC meeting short and sweet. Unfortunately, as the bender is followed by the hangover, so is the short ANC meeting followed by the tedious marathon.

The February ANC meeting must address all the Old Georgetown Board applications that have been queuing up for the last two months. As a result, we’ve got 15 different projects to trudge through next week. But nestled in that morass are several interesting items.

The first item that jumped out at GM as soon as he saw it is Brooks Brothers’ application to redo the Pottery Barn storefront. At the meeting we’ll find out whether Brooks Brothers is going to occupy the entire building or just one of the sections (the building has the Pottery Barn and the old Smith and Hawken spaces). Also, we ought to get a decent idea on when the store will open up.

The second item that ought to cause some interest is the presentation of the plan to renovate the Jelleff sports fields. GM has weighed in on his opinions, but at the meeting the Department of Parks and Recreation and the Maret School will be present to explain/defend the proposal. END_OF_DOCUMENT_TOKEN_TO_BE_REPLACED

As you may have read from the Current, the city recently entered into an agreement with the Maret School concerning the Jelleff sports fields. Much is unclear right now about the merit of the deal, however, what is clear is that the manner in which it was entered into is very alarming.

For those of you who don’t read the Current (which is the only newspaper covering this issue, and seriously, you really ought to read the Current) two weeks ago the city held a press conference at the Jelleff Branch of the Boys and Girls Club to announce the finalization of the $20 million agreement for the city to buy the club’s Georgetown property along with two other properties in the city. In a passing mention the Mayor disclosed that the city entered into a deal with the Maret School to fix up the Jelleff fields in exchange for giving the school semi-exclusive rights to use the fields. Carol Buckley of the Current diligently followed up on that point. Nikita Stewart of the Post, on the other hand, thought the most newsworthy element of the press conference was the Mayor’s opinion on Gilbert Arenas.

Here are the details of the plan as GM understands them:

The Current has described the semi-exclusive hours generally, but the actual hours contained in the MOU are even more than the Current discussed. They are: