A few more data points from GM’s annual survey of Georgetown stores: what type of restaurants are here? Here’s the answer: 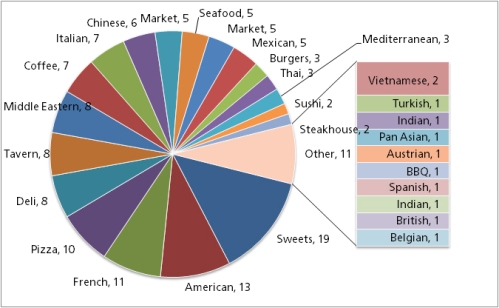 Last year “American” and Italian led the pack, but this year GM changed up the classification scheme. Pizza places were separated from general Italian restaurants, and burger joints and taverns were separated from American. This left the ascendant “Sweets” category at number one with nineteen different shops. END_OF_DOCUMENT_TOKEN_TO_BE_REPLACED

Filed under Stores of Georgetown

The State of Georgetown 2012 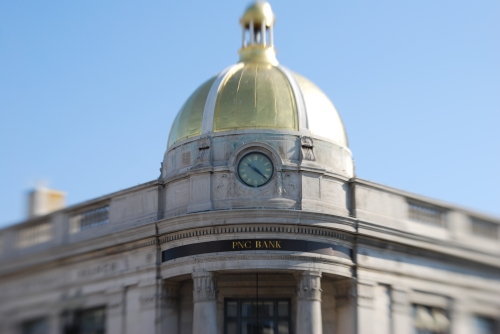 As discussed a few times over the last couple days, GM recently finished his annual survey of stores in Georgetown (again, just for reference sake, “stores” in this context means stores, restaurants, salons, etc.; basically any commercial space except pure office space). He’s sliced and diced the numbers and is ready to serve them up.

This year GM counted a total of 510 stores in Georgetown. This is a drop from the 527 he counted last year. As noted last week, this doesn’t mean Georgetown lost a net of 17 stores; it’s a bit worse than that. That’s because every year GM counts a few more stores that he overlooked in previous years.

When you just isolate out the openings and closings, the situation looks a lot worse. There were 78 closings in Georgetown in 2011. That compares with a total of 43 closings from the year before, and 47 the year before that. That’s a 81% increase in store closings. Put in context: 15% of stores open in February 2010 are now closed.

The good news is that there was a corresponding increase in openings to somewhat offset this gloom. There were 43 openings in 2011. That compares with 30 the year before, and 22 the year before that. So that means there were almost twice the number of stores opening in 2011 than in 2009. That’s some good momentum.

But there are still more new vacancies now then there was a year ago, 35 to be exact (to make the total number of vacancies 117). That’s an increase in vacancies of almost 300% over last year’s 13 net loss. This increase probably can be mostly attributable to the mall. Thus the overall story is that the pace of turnover (i.e. old stores being replaced by new stores) increased from 2010 to 2011, but the spike in vacancies in the mall means the net losses are way up. END_OF_DOCUMENT_TOKEN_TO_BE_REPLACED

Filed under Stores of Georgetown

The other day a few of GM’s readers lamented that the new Paul Bakery restaurant that is to open next to the Banana Republic is a chain. While it’s fair to complain about the lack of genuinely exciting or even interesting restaurants in Georgetown, one of the things Georgetown’s definitely not is chain-dominated.

Is the Georgetown restaurant scene a little threadbare? Absolutely*. Does it seem like no new and interesting restaurants open here? You bet. But that’s a product of a lot of forces, only some of which are controllable. END_OF_DOCUMENT_TOKEN_TO_BE_REPLACED

Furin’s: GM agrees with Joynt that Furin’s is special. It’s a classic diner offering all the basic breakfast fare. They’re prices are low and their service is really quick (sometimes too quick really). They offer an even larger lunch menu, but confusingly you have to order that up on the counter. All in all, it’s a quick and simple option.

J. Paul’s: J. Paul’s has a small but hearty breakfast menu. GM recently has taken to their Hangover Hash, a heavy scoop of gravy-soaked beef on an English muffin. You can normally get a table pretty quickly, which is a nice plus.

Kafe Leopold: Great German/Austrian fare. Good coffee and chic atmosphere. GM used to go here more, but then they changed their croque monsieur so that it now has mustard, which GM can’t stand. END_OF_DOCUMENT_TOKEN_TO_BE_REPLACED

Monday night at the ANC meeting, the BID presented its plans for the next upcoming Taste of Georgetown festival. Later on, the liquor license application of Lapis, a proposed Afghan restaurant, was discussed. Perhaps he was just hungry, but it got him wondering: what types of restaurants dominate Georgetown?

Being a nerdy wonk that he is, GM made a pie chart: 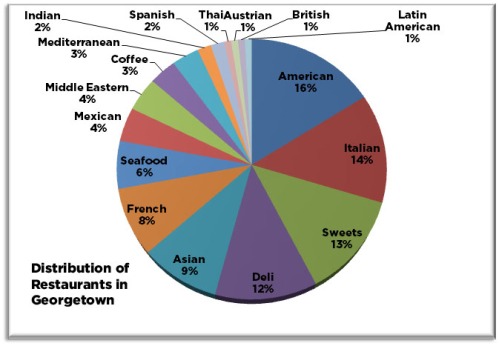 END_OF_DOCUMENT_TOKEN_TO_BE_REPLACED

GM tied the knot on Saturday at the Dumbarton House and now he’s on a two week honeymoon across Europe. As such he won’t be able to write timely articles for the next two weeks. In their place, GM has prepared a list of his top ten favorite things about Georgetown. Starting today at number 10: abundance. As in an abundance of stores, restaurants and other establishments.

As GM’s research discovered a while back, Georgetown is not as overrun with chains as many think. Yes there are a lot of chains, but there are simply a whole lot of establishments period. There over 400 stores, restaurants, and other establishments in Georgetown (it’s probably even close to 500 when you add the streets that were not in GM’s survey). That’s a huge amount of stores for a village of 60 acres.

There are so many stores and restaurants in Georgetown that if you don’t like a certain type of store or restaurant, there probably are a lot of places here that you don’t like. That makes it easy for people to write off the neighborhood because of its chains or because of its fratish bars. But in doing so, people ignore all those stores that they would like if they could see beyond the chains or frat bars.

There are three used and rare book stores in Georgetown, do you think many people know that?

It is that abundance, with its challenge to see beyond the warts, that GM selects as his 10th favorite thing about Georgetown.